An Update of Hockey and Football 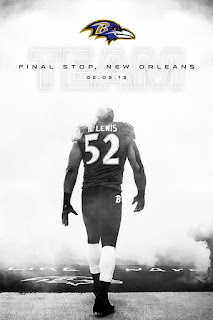 Things have been good in sports lately. I've fallen behind on my sports updates for the blog, so this post will encompass both hockey and football.


We all know that the two teams going to face off for the Superbowl tomorrow are the SF 49ers, and my team, the Baltimore Ravens. I admit, I'm new to football. I became a fan of the Ravens during last year's playoffs, as I was hoping for the game to be between Baltimore and New York (Giants). So tomorrow I'll be watching the game and rootin' for the Ravens.

Now for hockey and the Senators! Because of the shorter, more comprised season, I may not catch all the games, and a s a result, I won't post as often. But I watch when I cane and post when I can. The Ottawa Senators have been on fire. Most notably, they have defeated Montreal 5-1. One of our top players is out of comission (Spezza...he'll be back in April-ish after back surgery). Last night against Carolina, however, was a a bad game. We couldn't do anything on our powerplays, and Carolina basically zamboni-ed the rink with us. Montreal is looking for a rematch with us tomorrow afternoon so better give them a run for their money.

I like Sports (hockey, football...) but I just watch them. Ask me for stats or 'talk' sports...forget about it. I just watch and enjoy certain teams, especially during playoffs.
Posted by insurrbution @ 13:56