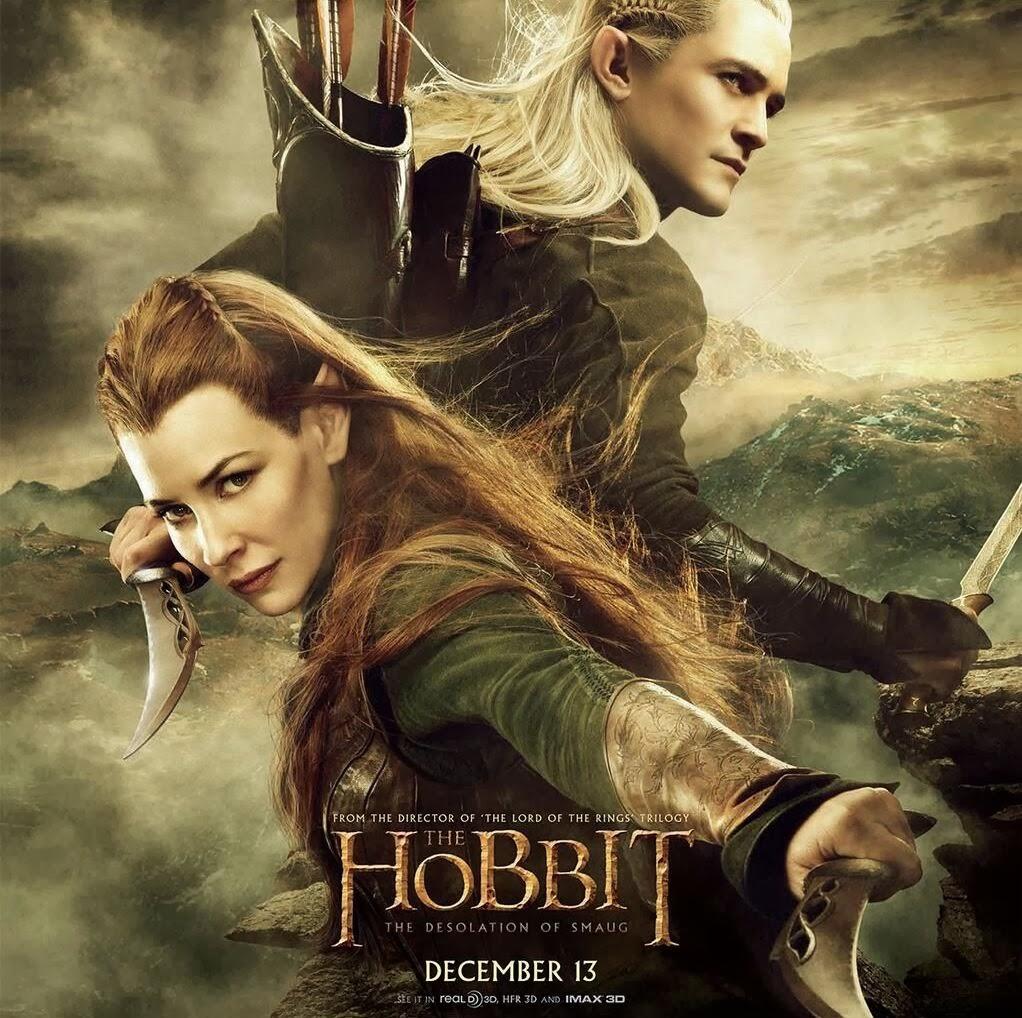 I am by no means a Tolkien scholar. There most likely have been better articles and selections of words used to express The Hobbit (Part 2) , as well as the idea of a Hobbit trilogy, and how it 'destroys' Tolkien's work, and "isn't The Hobbit". This article will examine the 'problem's with The Hobbit films, many of which came to light in the second film, according to the detractors.


Probably the very first thing you noticed about this post, was the image I used. I choose my images with thought, and purpose to the blog - whether it's because I like it and think it looks good in the post, is a particular edition of a book, or movie poster I like, etc. Here, I chose the poster to address some of the problems with The Hobbit (Part 2) it's called "The Hobbit" yet there's no sign of Bilbo! Sure, these are 'character posters' (not the 'actual' poster, but a series of posters used to show characters from the film.)

Now that the explanation of the image is used, I can properly introduce this post. I am a fan of Tolkien's books. I am by no means a purist, but I definitely agree that they are incredibly significant works of fiction, myth, folklore, fantasy, you name it. Fantasy has changed and evolved since, but one cannot deny that they are milestones.

We all know Tolkien published The Hobbit in 1937 - it's about Bilbo, thirteen dwarves, Gandalf the wizard, on a quest to reclaim a kingdom, as well as treasure. It was pretty straightforward and simple, yet quite excellent. It was very well received by pretty much everyone Tolkien also began work on a 'sequel' which would eventually be what is now Lord of the Rings (Fellowship of the Ring, The Two Towers, and Return of the King, for those who don't know by now). And for anyone who has read the book (it's one novel. One, but published in three parts due to post-war supply shortages and expenses) is aware, there's a lot more depth, detail, history, than was in The Hobbit. In fact, Tolkien at one point attempted to re-write The Hobbit, so it would tie-in with The Lord of the Rings better than currently does. Because of this, he felt that that made the book the book, was lost and wasn't quite the same.

That is what Peter Jackson & co have done. While they were filming Bilbo's journey for the screen, they decided to expand the scope, and fill in more of Tolkien's world & Middle-earth during that time frame.

Because Tolkien added so much more to Lord of the Rings than he did The Hobbit, there are many events that occur during then 'off the page'. Well, they've been filmed. So much filming has occured, actually, that 2 films went to 3.

But, was that a wise course of action?

That is the decision which has 'split' the fanbase. As stated, I read, reveled and respect Tolkien's books. I also think that Peter Jackson did a marvelpus job adapting the Lord of the Rings as films (especially the extended editions). Sure, there's some changes I don't agree to, and some scenes should have been 5 minutes instead of 10, or 10 instead of 5, but overall he did a pretty decent job.

Yet....a lot of people aren't too happy with The Hobbit films. Overuse of CGI? (yes, the orcs and the crazy stunts). Radagast being compared to Jar Jar Binks? (I can see it, but I disagree.) What I enjoyed about these films so far (we still have to experience Part 2 in extended form, and Part 3 both ways) is that we get to see more of Tolkien's world. Why wouldn't Bilbo see the Shards of Narsil when he was at Rivendell? Why wouldn't we see Galadriel, Saruman, and Legolas (in a slimmed-down run time role).

But the problem is, that we don't get enough of Bilbo and The Hobbit story, in favor for some of these things that were added in. I didn't like the fact that Legolas and Tauriel went to Lake Town. When the elves show up in Battle of Five Armies, place them there, after the audience meets them (and has a few scenes here and there) in Mirkwood. Even there, Tauriel can meet up with her dwarven love.

I didn't mind the introduction of Tauriel, or Legolas being in the film - I wasn't a fan of how 'big' their parts were. As mentioned, I'm not a Tolkien scholar, and some details may slip by me. I don't know if Thranduril was the same as he was in the book or not.

The Gandalf side quest material was pretty interesting to see (though I thought he couldn't fight Sauron directly??)

This is beginning to sound like a film review of the film, but sum it up: too much CGI, less focus on Bilbo thus far (inf avor of newly created sub plots), other things. If Smaug can only be killed by black arrows, why have a 15-20 minute 'let's kill the dragon' scene? Some changes make sense, others, 'Bolg-le' the mind.

In short, The Hobbit, the children's novel you read and cherished is now a grand epic trilogy, attempting to set up Lord of the Rings. Sure, the story of The Hobbit gets told in full - but it takes three full movies to get there. Also, if you weren't a fan of The Two Towers theatrical release, will most likely not enjoy this. As I said, we still have to see the Part 2 extended edition as well as Part 3 theatrical cut, and the Part 3 extended edition.

What I'd love to see - a fan edit once the Part 3 extended edition is out, removing all the non-book sequences and edited just so it's the novel on screen. Also, I'd love to see an interview between an esteemed Tolkien scholar, and Peter Jackson himself discussing changes amde, and why, as well as the difficulties adapting a book to screen.

I'm hoping that after people see The Hobbit (Part 2) in extended form (and the whole trilogy), they change their minds. It worked somewhat with The Two Towers.

Finally, after Lord of the Rings, hype for these movies was super high. Was it as groundbreaking as the Rings films? No. Was it as good? About the same I'd say. Because of hype, changes, and other things these films aren't too well received by those willing to detract the film. Peter Jackson has sought to do what Tolkien intedned to do when he attempted to re-write The Hobbit. Whether or not that worked, though, is up to you to decide.

I will do an entry after I've seen all three extended editions of The Hobbit Trilogy, and can look back at The Hobbit as a complete whole. Don't be too hard on this film - if you've seen Lord of the Rings, you're getting anything 'new' or' better' in terms of movie making or quality here. Either way, I'm looking forward to the 2D blu-ray extended edition Trilogy box set.