"In a hole in the ground there lived a hobbit". That sentence has been iconic for quite a few decades now, since 1937.


In 2001-2003, Peter Jackson with his vast and talented crew brought us three Lord of the Rings films, based on the novel, which was split into three volumes for publication in the '50s. It took place about 60 years after The Hobbit, which was released in 1937. The movies were incredible on all levels. I was so amazed at watching Part 1, back in 2001, that I became a lover of scenery, wilderness, architecture and art. The films also saw Extended Editions not too long after release. Around the release of Part 3 (The Return of the King) we became hungry for more Middle-earth on film; and questions about The Hobbit began to come up. In short, due to rights and legal reasons, The Hobbit couldn't be made...yet. 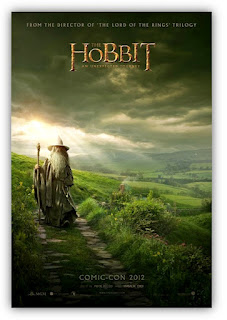 I won't go into the legalities or issues that came with planning The Hobbit, but rather the final product. Here were are, in 2012...and we got Part 1 of 3. I bet you're wondering 'wait...The Hobit is about 300 pages...how do we get THREE movies out of that?!" Well, the thing is, not JUST The Hobbit was filmed. Other things were going on in Middle-earth 60 years before Lord of the Rings begins. In the book, we find out what some of those things are. Since The Hobbit was published in 1937, and Lord of the Rings in the '50s, the world...advanced. Tolkien created Saurman, Galadriel, Legolas, and some others after The Hobbit. They're not in the book. Since they were around for quite a while, it's not surprising to see them in that same time period. Basically, Peter Jackson and crew didn't just adapt The Hobbit, they made a 'prequel trilogy', with Bilbo's, Thorin's and Gandalf's journeys being the backbone of the three films. Here is something to be clear on:

Now that I got some background info down, it's time to review the review the movie! 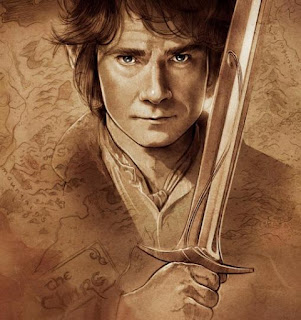 The Hobbit has the same grand, epic, sweeping, majestic feel that Lord of the Rings had, which is not surprising considering it's pretty much the same crew who worked on both trilogies. Martin Freeman is amazing as Bilbo. I much prefer him as Bilbo, than I did as Elijah Wood as Frodo. Frodo was good on film...but I liked Bilbo's 'quirkiness' and reactions much more. Ian McKellen is back as Gandalf the Grey. Hugo Weaving again is Elrond. Andy Serkis as Gollum. Some other familiar faces abound too - I won't say anything here but if you've seen some previews or looked at the cast list on IMDB, you know who I mean that wasn't in the novel.

In terms of new faces, we get another wizard, this one brown, and thirteen dwarves. Speaking of new faces, Richard Armitage is quite good as Thorin Oakenshield.

Howard Shore again does the music, so you'll hear some familiar tunes and themes (Hobbiton, Rivendell, for instance) as well as new ones.

The visuals are great; again seeing some familiar ones and new places. We get some fantastic shots of Middle-earth, and the graphics are impressive, blending quite well with Lord of the Rings.

We get about the first six chapters of The Hobbit as well as a prologue, as well some other scenes sprinkled in, making the run time approx 2 hrs and 40 min (approx, not sure what the exact number is). It feels long in spots - perhaps make a 10 minute scene into a 5 minute one here and there, possibly trimming the runtime by about 10-20 minutes.

With these films, as well as others getting 'split' (Deathly Hallows, Breaking Dawn, and most likely the final Hunger Games book, Mockingjay) one wonders what Lord of the Rings would be like had it been released now. I expect that it would have been the Extended Editions, with the ending of each 'part' (on DVD & blu-ray, each Extended Edition film covers two discs) edited a bit differently so each part doesn't 'stop' abruptly. Sure, more material could have been filmed and sued (other parts of Middle-earth?), though Jackson and co. wanted to tell the story of the journey of the ring. Not to mention not everything would work well on film (Tom Bombadil for instance).

I saw it in 3D. Not IMAX, and not the higher frame rate (it seems that's where some critism comes from, just a head's up...). The 3D isn't used so much as 'pop out' but to add depth and dimension to screen.

So does The Hobbit live up to the hype and expectation? Yes. Especially if you liked the Extended Lord of the Rings.

With the high-frame rate, it's a gamble. I haven't seen the film in the format. If you see it in that format first, don't blame the film, blame the technology used.

I give this film a a very solid: 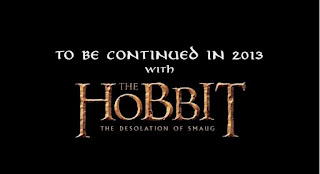 Next December we see Part 2. Now, I said this is spoiler-free, so I'll use chapter names from The Hobbit for where I believe Parts 2 and 3 will start / stop.

[we may get a 'new' scene at the beginning]

Barrels Out of Bond

I believe that Part 2 will end with either the arrival at Lake Town, or on the doorstep of The Lonely Mountain.

The Gathering of the Clouds

A Thief in the Night