Waiting for 'Winter' : Tales of Dunk and Egg and more 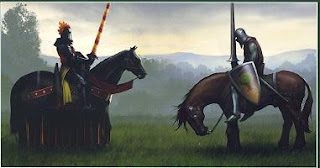 As you may well be aware by now, I can't wait to read The Winds Of Winter, the next book (Book Six) in George R.R. Martin's Ice and Fire series. It won't be coming this year. Or next. But here are some other things by George R.R. Martin to whet your appetite...


TALES OF DUNK AND EGG

These are the prequel novellas to the Ice and Fire series. There's three out already (Hedge Knight, Sworn Sword and Mystery Knight) with a fourth one coming up next year. They have been released mostly in anthologies, and I think if you have an e-reader you get them on their own also. Some time after the fourth one is published, they will be collected into their own anthology. not sure how many total there will be...six? Nine? Twelve?

George R.R. Martin has been writing them and releasing throughout the course of the Ice and Fire series. They're 'novellas', and they take place about 80-100 years before Book One, Game of Thrones, begins.

Here's how House Targaryen looked during the time of Hedge Knight :

There's sources to read up on the series, etc but I went here: http://en.wikipedia.org/wiki/Tales_of_dunk_and_egg

And now, for some re-issues of George's previous works....

This came out Oct. 16 in the trade paperback (same size as hardcover but 'soft' instead) and is a story collection. There's also....

George has commented that there won't be a Vol. 3.

I haven't read (or own a copy of) Windhaven yet, but what people have told me online is that it's George's best non- Ice and Fire book.

DYING OF THE LIGHT

A sci-fi book by George taking place on a dying planet.
Posted by insurrbution @ 16:08