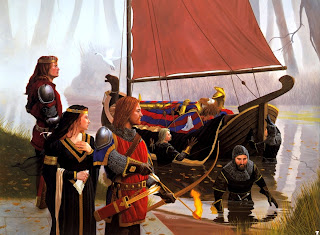 If you haven't heard by now, HBO has renewed Game of Thrones for a third season. Being a 'Thronie'; I'm glad to hear the news, but not surprised due the popularity. The title of my post is a nod to a certain event which occurs in Storm of Swords: a massive spoiler, shocking event which happens. Don't worry, I won't post it here...or at all. What follows is my reaction to the news, and thoughts on how the rest of the series could go....


Season 1 followed book 1 (Game of Thrones) pretty much to the T. We're only two episodes into season 2 (Clash of Kings) but so far it's pretty close, and there isn't I noticed missing. However, 'Yara' is a funny way of saying 'Asha' (in the book Theon Greyjoy's sister's name is 'Asha Greyjoy'; but on the HBO series it's 'Yara Greyjoy'.)

Now this is where things get a bit difficult to determine - the structure of the show's future. There are going to be 7 books in the series. Five of them are out, the final two yet to come. The books are: 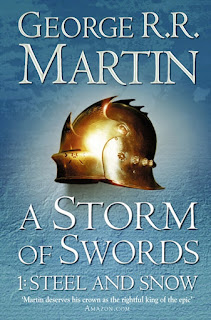 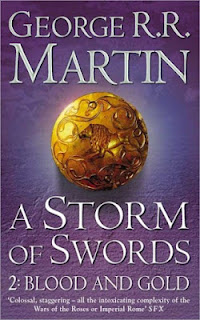 As it stands, books 3 & 5 are massive, over 950 pages in hardcover. Fitting all that into a season (even if it's 12 episodes instead of 10) will be difficult. So, will Storm of Swords receive two whole seasons to cover all the material?? Interviews etc in the past with creators has made it seem likely. Even George R.R. Martin himself said that two seasons will be needed for that book. In other countries (let's use the UK as an example), so far books 3 and 5 have been split in two for the paperback release. I'm also counting on 6 and 7 to get the same treatment. Same reason why sometimes Lord of the Rings is 3 books. This may help the writers and creative team figure out where to 'break' the book into subsequent TV seasons.

What about after the material for Storm of Swords though? Below is a timeline of how the books are laid out. 4 and 5 happens at the same time but...ah, I'll let the picture below do the talking: 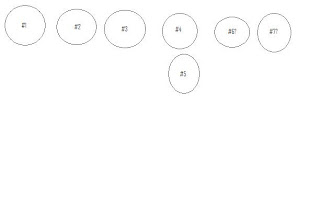 Apologies for the crudeness, but you get the idea. So I'm wondering what will happen with the material presented in books 4 and 5? I'm guessing, as you can they both run at the same, and are separated by geography rather than 'time', (the second half of book 5 picks up the characters' stories in book 4 and continues them) that we'll get two 'mixed' seasons covering both books, and then two seasons for book 6 and two seasons for book 7. George R.R. Martin said that 6 and 7 will most likely be about the same size as books 3 and 5 (950-1016 pages, give or take).

In a nutshell: Game of Thrones: 1 season; Clash of Kings: 1 season; Storm of Swords: looking like two seasons; Feast For Crows + Dance With Dragons: 2 seasons, mixing the books; Winds of Winter: 2 seasons (based on projected length of book, 1 may work); Dream of Spring: 2 seasons (based on projected length of book, 1 season may work, especially if the series finale or premiere are more than an hour long)

"Like the first two seasons, it will be ten episodes long. This one will cover (roughly) the first half or thereabouts of A STORM OF SWORDS, the third novel in the series."


"I would say that, going forward, 10-episode seasons are really all that are possible, given our 12-month [production] cycle,” Weiss said. “For this show specifically, it’s really all we can do to do 10 of them in a year. I would say not to expect more than 10 a season any time in the near future … We had always planned on a 10-episode season [for the show's third year].

We’ve always said that we see the show as an adaptation of George’s series, not this book or that book. It’s definitely true that ‘A Storm of Swords’ is too big to even come close to fitting in one season. [...] Book 3 is definitely too much for a 10-episode season, so we’re taking the long view of the series of the whole, and trying to do as much justice as possible to George’s overall epic story and be as true to the spirit as we can, while keeping it an exciting and viable and vivid as a television show that stands on its own two legs.
A season of television needs to feel like a season of television. We have so many storylines to juggle, and they all need to ideally have a sense of a beginning, middle and end over the course of a season. Each character needs to feel like they’re traveling a specific road in the course of a season, and coming out as a different person than they went in. It’s never going to be about taking a book and ripping it in half — ‘At page 673, this is the place where [the season] ends.’ It comes down to case-by-case [decisions] with each story and how best to serve each character’s story going forward."

So if you watch the show, stick with it, spread the word in hopes that the show won't get executed, and end on it's own terms. If you're debating about whether or not to continue, keep tuning in. It gets better and better. If you've never seen it, grab the season 1 blu-ray...now.

Email ThisBlogThis!Share to TwitterShare to FacebookShare to Pinterest
Labels: Game of Thrones, HBO