Do any moments in your life feel like a dream? I don't mean in the sense of something positive or negative happening, but an event happening that generally feels surreal. Such as, you host a party you spend two weeks planning, and the day after, you think, "Did that happen?". One such a day for was September 11, 2001. Exactly TEN years ago 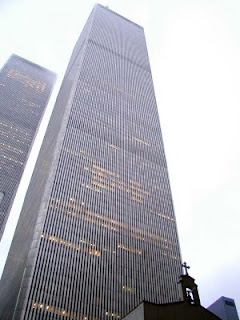 I was not in New York City, or any of the other sites where the planes hit. Nevertheless, I can still remember "THAT" day quite well.

I was in High School at that point, in my final year. I was looking forward to graduating in June, and the upcoming first part of Lord of the Rings. When I had heard, the exact message I got was "New York is under attack."

My first thought was something akin to the Peal Harbor attacks in '40s where the entire area was under attack. Another thing that went through my head (after I got a few more scraps of information, such as 'bombing') was that random, spread-out areas of the city were under siege, or even, a nuke went off or something. Either way, it was so unbelievable, and shocking, that what happened that day ACTUALLY happened.

There are many deaths and tragedy every day in the world. Many of them go unnoticed by the media. I think, though, why September 11th felt so different was for two reasons - it was closer to home (and for many people it literally happened right in their backyards). when something so terrible happens so close, it affects one differently.

Of course the other reason was the scale of it. I'm talking both about of people affected, and, well, the actual SIZE of the towers. I had never seen them with my own eyes, and of course, will neverbe able to, but I admit to never being to NYC, the WTC Towers was a draw for me. Much in the same way the CN Tower is to Toronto, Space Needle to Seattle, and so on.

My friend I left for the day, and when I got home, I, like virtually every person on the planet, saw it on the news. Over the course of the day, I watched in disbelief as what looked like planes (they could have been missiles. This post is not about possible conspiracy theory of that day, however, I can't ignore that fact. This post is acknowledging loss, heroism & bravery displayed by humankind that day) slamming into the Twin Towers, The Pentagon, as well as the wreckage and rescue teams. 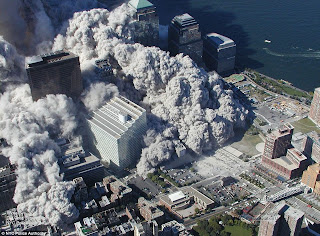 On that day, police officers, firefighters, the US Army, even those trapped inside the buildings above where the planes hit, and countless others went above and beyond their duties, as they were not doing their jobs, but answering an inate call of duty within themselves to help another human being.
Hundreds and hundreds of lives were lost that day. A significant number were from the initial attacks, many more from the s&r operations. As a firefighter once said, "I'm not a hero. I'm just a fireman." 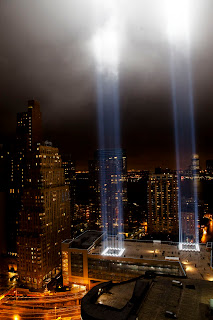 Looking back, and even shortly after, "9/11" was of interest to me. What I mean by that, is how some people like to study WWII history, JFK, and other pivotal events. Things leading up to September 11, Sept. 11 itself, and the aftermath. Afterall, without sounding insensitive, this was history unfolding before our very eyes.

As is the case of any major catastrophe, we, as humans, recover and rebuild and carry on the stronger for it. 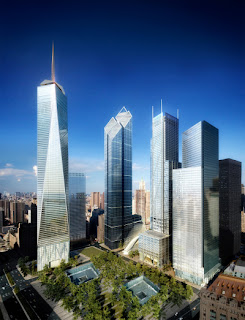 In closing, I'd like you to look at this last picture below. What do you think when you see it? To me it feels almost dream-like : "WAS there a time those towers existed?" 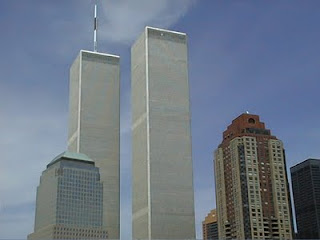 P.S: I'd like to attach some song lyrics that I believe suit the situation 10 years from today, and today when we remember those tragic events. Normally, I'd attach a link to the song on Youtube, but I want you to READ the lyrics.

Yesterday,
All my troubles seemed so far away,
Now it looks as though they're here to stay,
Oh, I believe in yesterday.

Suddenly,
I'm not half the man I used to be,
There's a shadow hanging over me,
Oh, yesterday came suddenly.

Why she
Had to go I don't know, she wouldn't say.
I said,
Something wrong, now I long for yesterday.

Yesterday,
Love was such an easy game to play,
Now I need a place to hide away,
Oh, I believe in yesterday.

Why she
Had to go I don't know, she wouldn't say.
I said,
Something wrong, now I long for yesterday.

Yesterday,
Love was such an easy game to play,
Now I need a place to hide away,
Oh, I believe in yesterday.

And when the night is cloudy, there is still a light, that shines on me,
shine until tomorrow, let it be.
I wake up to the sound of music, mother Mary comes to me,
speaking words of wisdom, let it be.

"Where the Streets Have No Name" - U2

Is it getting better
Or do you feel the same
Will it make it easier on you now
You got someone to blame
You say...

Did I disappoint you
Or leave a bad taste in your mouth
You act like you never had love
And you want me to go without
Well it's...

And if the darkness is to keep us apart
And if the daylight feels like it's a long way off
And if your glass heart should crack
And for a second you turn back
Oh no, be strong

You're packing a suitcase for a place none of us has been
A place that has to be believed to be seen
You could have flown away
A singing bird in an open cage
Who will only fly, only fly for freedom

And I know it aches
And your heart it breaks
And you can only take so much
Walk on, walk on

Home... hard to know what it is if you've never had one
Home... I can't say where it is but I know I'm going home
That's where the heart is

and I know it aches
How your heart it breaks
And you can only take so much
Walk on, walk on

It is difficult to convey emotion through words, but I try.