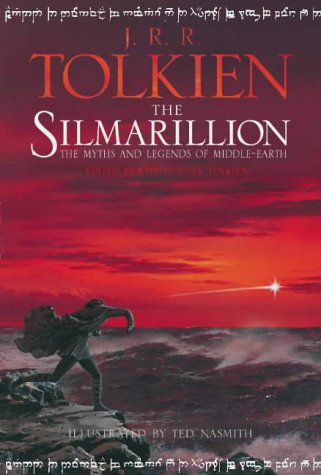 When The Lord of the Rings 60th Anniversary Illustrated Edition came out out a few years back, I noticed how it was essentially an updated version of the Centenary Edition. I thought it would be neat if The Hobbit and The Silmarillion also got editions to 'match' that.

This post examines how I would like a 40th (or 50th or beyond) edition to be presented, and contain with that in mind. Please note, this is all wishful thinking on my part.

- transparent slipcase- re-scanned paintings- the most recent, and accurate, text setting of The Silmarillion [including Tolkien's letter]- chalk-white paper- unjacketed book: the iconic image of Maglor casting a Silmaril into the Sea on the front cover; Beren and Luthien being flown to safety on the back cover. - The Realms of the Noldor and the Sindar map is located on the last integral page. The Map of Beleriand and the Lands to the North coloured by H.E. Riddett appearing on both endpapers.
- 1/4 bound bright terra cotta ["spine colourization"]- dimensions would match the 60th anniversary of The Lord of the Rings illustrated by Alan Lee
- Contains the following plates by Ted Nasmith:

As I said, this is all wishful thinking on my part, however I do believe it would make for an awesome edition!