"The Wheel of Time Companion" Review 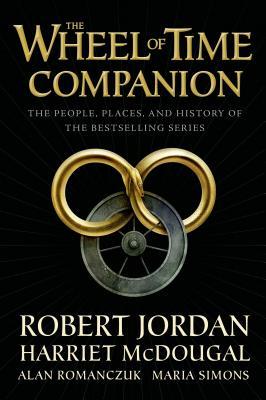 I got this book a little bit ahead of publication date. Sometimes that happens.

I finished The Wheel of Time series a few years back (I believe it was 2013 or 2014 sometime, I forget which year; but I've documented all my Wheel of Time reviews.)

I haven't "read" this book, and that's because it's essentially an A-Z companion of the entire saga. One COULD read the book, cover to cover, AS a book but that's the intent for its existance.

So how can I review it then??

Because judging from the size, and nature of the contents, I know enough to give it a rating, and write about it.

First of all, the edition I got was the (trade) paperback (which, size-wise is about the size of a hardback, except it's made a paperback). I've always gotten The Wheel of Time as paperbacks. Way back when I started reading / buying the series, I believe the most recent book to be published in (mass market) paperback would have been Book 10, "Crossroads of Twilight." Since then, I strive for uniformity / matching formats within a series. Anyway, so the (trade) paperback of the Companion is the first published. there very could be the smaller, thicker, mass-market someday...but it wasn't the first to be published. In fact, to better explain, the book DEFINITELY matches the re-issues that TOR have been putting out here and there over the past few years. It'll definitely match with those. But since it's a Companion book, and not "Book #__" for instance, it's ok if it doesn't "match" the other titles. The fact that it's a Companion benefits the larger size. Maybe because of that it won't exist as a mass market brick of a book?

Like The Wheel of Time series, this book isn't perfect. There are possible errors in it, as indicated in the foreword itself. This is because the body of work is quite vast (14 books long, each being no shorter than 700 pages long, in mass market) and that Robert Jordan has passed away; therefore fact-checking more difficult than usual because of that.

The book serves as a great companion to the 14 books. There isn't a Table of contents, as it's A-Z formatted. However, the back cover [picks book up] states: "included in the book in A-Z format are: an entry for each named character, an inclusive dictionary of the Old Tongue, new maps of the Last Battle, new portraits of many characters, histories and customs of the nations of the world, the strength level of many channelers, descriptions f of the flora and fauna unique to the world, and much more. However, looking at what the book contains, finding some of those may be a tad tricky, if you don't know what to look under. the maps of the Last Battle, it makes sense they would theoritically be under the Last Battle entry. However, it could have been benefecial to separate portions of the Companion into sections. Not the entire thing. Have an A-Z listing, and then afterwards, perhaps group all the maps. Following the maps section, perhaps give the Old Tongue its own section. For all I know, that may have come up, but it's something I noticed about the book.

Another point I wish to address is spoilers. They mention spoilers in the beginning of the book. But how 'spoiler-y' are they? Would one ruin the reading experience if they were to use the Companion AS they read?? Again, as I haven't 'read' or 'used' this book yet, it's difficult to say. In fact, I just looked up a character and the book tells you EVERYTHING about them. Because of this, for anyone who's familiar, the book appears to be more akin to what Robert Foster's Comple Guide to Middle-earth is to The Hobbit, the Lord of the Rings and The Silmarillion, rather than a 'guide'.

So I can easily recommend this to anyone who owns, and enjoyed, all 14 books. As well as those that plan to buy, or are purchasing, the 14 book series. I will caution its use, however, as it appears to be beneficial for re-reads, or best use post-series.

There is lots here that the readers and fans will love. If you've got all 14 books already, go for this one. If you are buying, or plan to buy all 14, get this; but get it last.