For the very first time on November 1, all 6 Middle-earth films will be released in one package on blu-ray, consisting of 30 discs.

This box set, includes the following films, in order of release:

The official info is as reads: 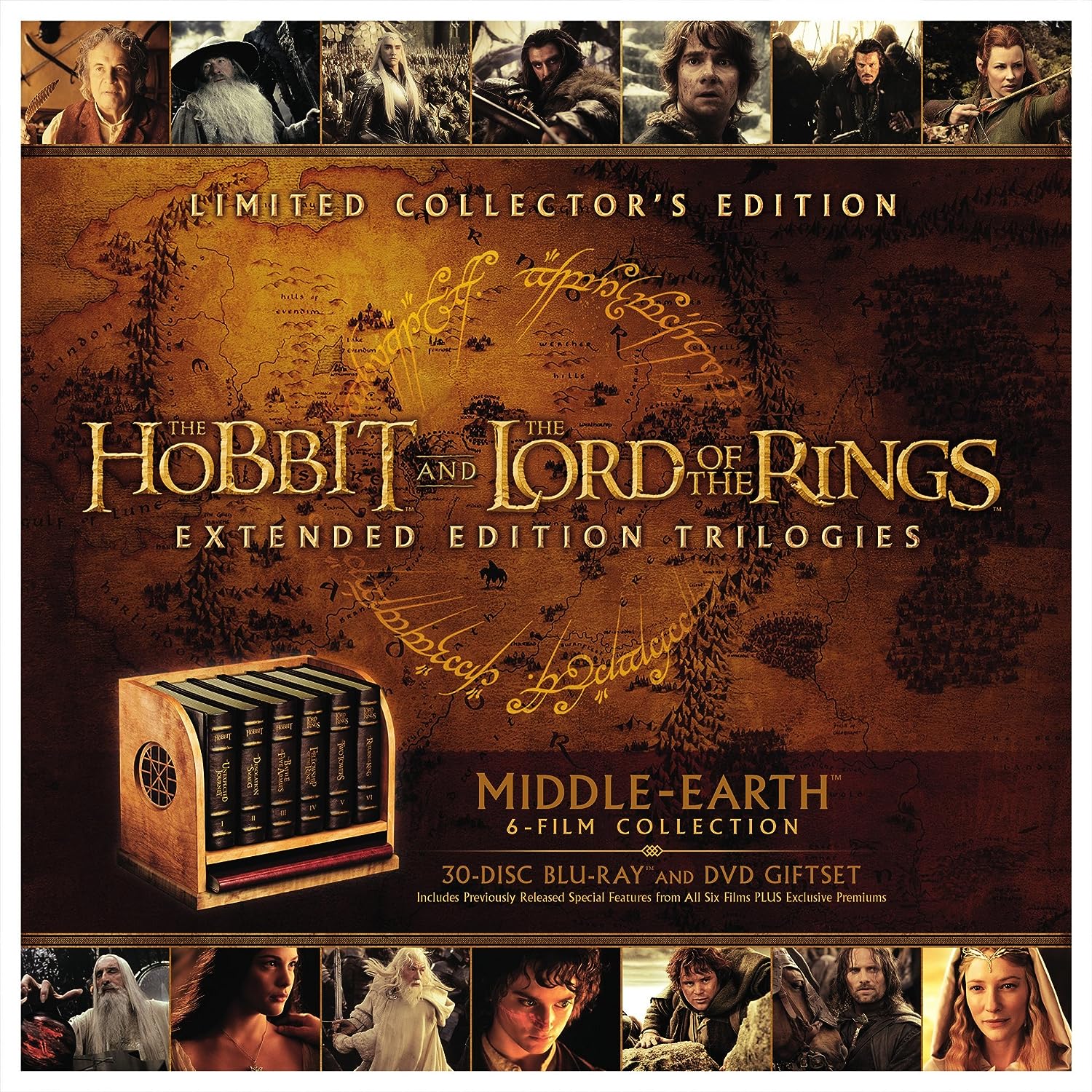 - For the first time ever, Academy Award®-winning director Peter Jackson's epic adventure is available in one spectacular limited collector's edition box set.
- The Limited Collector's Edition includes 30 discs featuring all six Middle-earth films in their extended edition forms, housed in six stunning faux leather books and a collectible Hobbit-style wood shelf. The one-of-a-kind wood shelf is crafted from solid wood with design selected by Peter Jackson.
- In addition to the extended edition release of every film, the collection also includes all previously released bonus content from both the theatrical and extended editions.
- Exclusive premiums designed for the collection include: · Spectacular 100-page sketch-style book with replica The Red Book of Westmarch, filled with original film sketches and new artwork · Original reproductions of exquisite watercolor paintings by acclaimed conceptual artists Alan Lee and John Howe, framable and wall-ready
- THE HOBBIT: AN UNEXPECTED JOURNEY – Follow Bilbo Baggins, who – along with the Wizard Gandalf and 13 Dwarves, led by Thorin Oakenshield – is swept into an epic and treacherous quest to reclaim the lost Dwarf Kingdom of Erebor. THE HOBBIT: THE DESOLATION OF SMAUG – Our heroes escape the giant Spiders and Wood-elves of Mirkwood before encountering the mysterious Bard, who smuggles them into Lake-town. Finally reaching the Lonely Mountain, they confront the Dragon Smaug. THE HOBBIT: THE BATTLE OF THE FIVE ARMIES – The Dwarves of Erebor have reclaimed their homeland, but face the consequences of unleashing Smaug. As five great armies go to war, Bilbo fights for his life, and the races of Dwarves, Elves and Men must unite or be destroyed.
- THE LORD OF THE RINGS: THE FELLOWSHIP OF THE RING – With the help of a courageous fellowship of friends and allies, Frodo Baggins embarks on a perilous mission to destroy the legendary One Ring. THE LORD OF THE RINGS: THE TWO TOWERS – In the middle chapter of this historic movie trilogy, the Fellowship is broken but its quest to destroy the One Ring continues. THE LORD OF THE RINGS: THE RETURN OF THE KING – The final battle for Middle-earth begins. Frodo and Sam, led by Gollum, continue their dangerous mission toward the fires of Mount Doom in order to destroy the One Ring.

The shelf is an interesting, yet neat addition to the box set. I was thinking that it would come with a weta statue or bookends. Of course, I've yet to see actually see all the contents in-depth (I'm going to be keep a close eye out for those unboxing videos) but I'm looking forward to getting a close look at the physical goodies (the shelf, the accompanying booklet) especially the art prints which could be frameable. I'll keep a close out on ebay or something as well, in case portions of the set gets sold separately on 'the market'.

This is great for fans that were waiting for a complete 6-movie box set, or don't any of the (extended!) films on blu-ray yet.

The pre-order link for Amazon.com is here: https://www.amazon.com/Middle-Earth-UCE-BD-Blu-ray/dp/B01JH3KL0E/ref=sr_1_1?s=movies-tv&ie=UTF8&qid=1471738426&sr=1-1&keywords=middle-earth
The price is currently quite steep. Not that I agree with it, but there are some things to consider: it contains 30 discs, and it's going to be limited edition. It's possible the price may decrease via public outcry (see that low rating?). Also, there's always Black Friday. If the price is a bit much for you, here's the next best thing:

Here is the link for The Lord of the Rings extended blu-ray trilogy: https://www.amazon.com/Lord-Rings-Fellowship-Extended-Editions/dp/B007ZQAKHU/ref=sr_1_1?s=movies-tv&ie=UTF8&qid=1471739831&sr=1-1&keywords=lord+of+the+rings+blu-ray