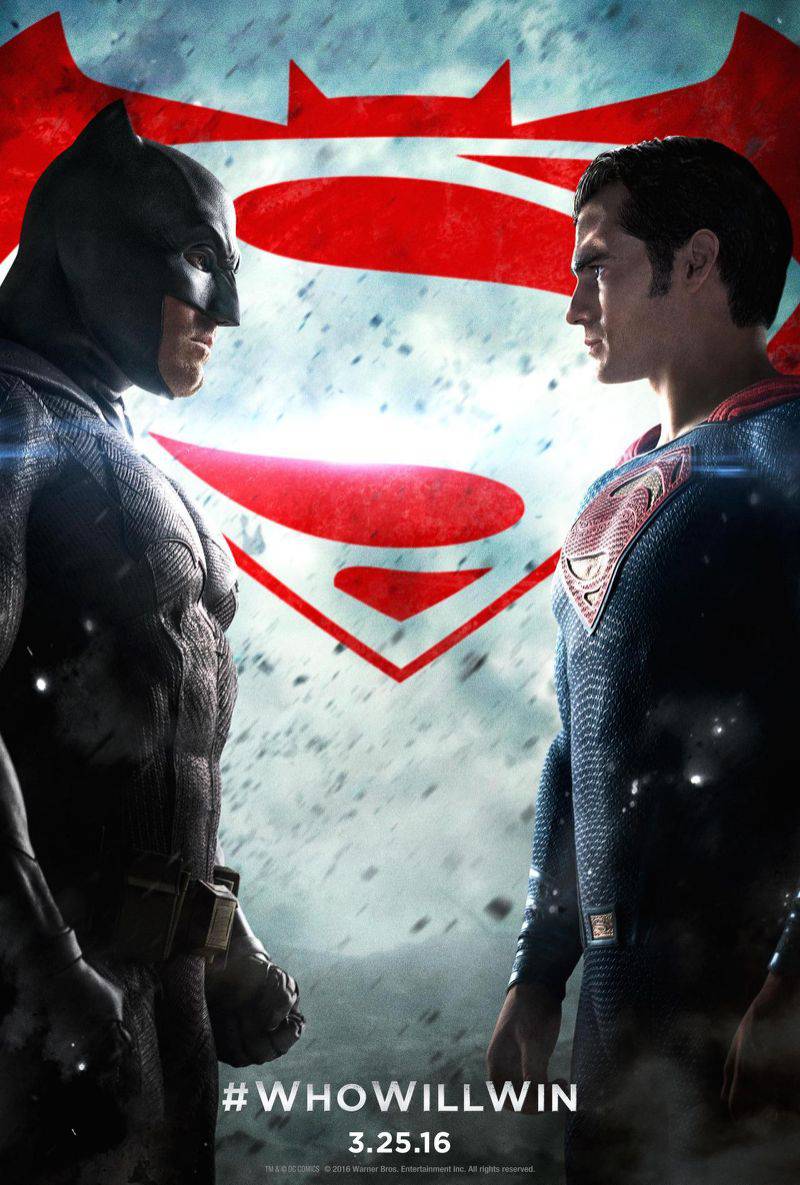 I was very skeptical with the pre-release and initial release of this film. I'm not choosing 'sides' but I need to stay that I'm a Marvel fan....of live action movies. I really enjoyed Christopher Nolan's Batman trilogy, but outside of those, DC hasn't fared that well on the live action movie releases. I quite like some of DC's comics, their animated movies are awesome, and the DC tv series ("Arrowverse" I think it's called) have my got attention better than S.H.I.E.L.D did...but then again those Netflix Marvel shows are pretty great thus far.

I wasn't overly fond of Man of Steel (granted, I only saw it once and may need to give it another watch. Sadly, there isn't a director's cut or extended version to check out) so I was very skeptical to initially see Dawn of Justice. Last year's Comic Con preview was the best of all the previews for this movie. Then one of the last previews hit (Wonder Woman, Doomsday...) and my skepticism was more cemented. Finally, the movie came out, and I hadn't heard that many good things about it, so I definitely decided to wait to see this at home.

However, there were talks of a director's cut (dubbed 'ultimate edition') that was longer than the theatrical release. I figured, since I was waiting for the 'at home' release, that I'll just watch the ultimate edition instead. Luckily, it came with the initial home viewing launch of the movie, and I didn't have to wait longer for the ultimate edition (you know, like how the Middle-earth movies got the extended editions after the initial at home release).

Now, where to begin with this review....since I never saw (and never will see) the theatrical edition, I was eagerly anticipating the longer version. I went in completely raw (save for seeing a few previews.) The film opens on a street-level view of the climax of Man of Steel, and offers as a 'counter' to the devastation caused by that film, and shows why not everyone doesn't regard Superman as a savior, or completely good. Essentially, Superman's intentions and ctions are called into question due to the events in Man of Steel. Even then, sure Superman saved the planet, but lots of people died (either by his actions directly, or the initial earth attacks) so you have someone becoming handicapped (loss of legs), or a oung girl losing her mother. I won't go into the entire plot, but rather what I thought of the movie....it was interesting to see the how and why of why Batman and Superman meet, and what drives it. Also, this is a 'low point' for both characters as well.

The casting is pretty good. I didn't imagine liking Jeremy Irons as Aflred at the outset (nothing against him, I had just thought it would be a bad fit) but he does the role well - in this universe. One of the biggest complaints pre-release was Ben Affleck as Batman. Long ago, I would have agreed with that statement. But, have these naysayers actually seen Affleck in The Town or Argo? "Affleck 2.0" is a lot better than the Ben Affleck of about 10-15 years ago. He is definitely awesome as Batman. The cast from Man of Steel also return, with a few newcomers.....namely Jesse Eisenberg as Lex Luthor. That was one of the big problems for me - I'm not a fan of this universe's approach, or angle to Lex. But as to why, is that it's vastly different from previous takes on the character I've seen before. Jesse Eisenberg, acting wise, does a job with him, but it's not to m taste.

Also, Gal Gadot is welcome as Wonder Woman! We finally get to see Wonder Woman in live action! And, with that comes another complaint of mine. Despite deleted footage being reinserted into the film I still believe that this could have been two films, rather than one. I would have liked to have seen a "Batman / Superman" combo film, and then a "Dawn of Justice" as its sequel, and you can introduce Wonder Woman in there, and hint at a few more future Justice League members. I call this film "Dawn of Justice" for a reason, as opposed to it's Batman-Superman title' and that's because it feels like a big set up to the Justice League, rather than focusing on Batman and Superman and their interaction and confrontation.

At times, it feels like it's going into separate directions, or, trying to put so much into one film. Marvel knows how a handle a cinematic universe, whereas it seems that DC is trying to cover too much, too fast. Even with a longer running time, that's a problem I recognized in the movie, as well as a few things here and there I wasn't a fan of.

The action scenes were quite good, when we got them. This is definitely a 'super hero drama' (the ultimate edition runs at 3 hours, give or take a few minutes) but there are some good action moments. It's also quite clear in a few instances that this movie was made for comic book fans, as opposed to 'all movie goers' that the MCU is friendly for. This also a hindrance for Dawn of Justice.

Now, the ultimate edition won't necessarily fix what problems currently exist within the theatrical edition, it does smooth out a few bumps and wrinkles. Remember how the extended edition for The Hobbit: Part 3 saved the movie? or how Kingdom of Heaven made for a much better viewing experience with the director's cut? Then there's The Lord of the Rings extended editions, as well. In the case of Dawn of Justice, it improves on the original version. You do get the theatrical content, plus more footage...this isn't a 're edit', which I believe, would have 'saved' this movie, or made it a lot better.

I'm giving the ultimate edition, having not seen the original version show in cinemas, a solid, rounded-up, all-around

7 /10
Marvel definitely excels at live action films, but I look forward to seeing what else DC has up their sleeve in the future of their cinematic universe...I'll just be wary, wait for the 'at home' releases, and watch any directors cuts, should any more be released. To me, it's not a 'competition', but Marvel has been building up their cinematic universe up since 2008, while it seems DC is trying to 'get there' a lot quicker.

It wasn't perfect, but I enjoyed it. Some things I would have changed, or handled differently. I agree with a few of the critical points raised, but I must say, if you've never seen this movie before and are interested, opt for the ultimate edition. Likewise should you wish to revisit the film. Ultimate edition is the way to go; again, going by me not seeing the original theatrical release.
Posted by insurrbution @ 21:10