Of Elfstones and Tolkien 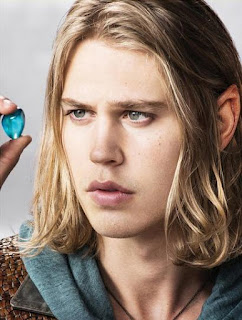 Fantasy sometimes gets a pretty bad rap when it comes to live action adaptions. There have been more 'bad' than 'good'. I won't go off listing some of the bad ones since The Lord of the Rings film trilogy showed us that it can be good (or close to when it came out.)

There's been a TV series on MTV (I know, shudder, right?) that's been doing well for the network. Well enough to get a second season renewal. It's called The Shannara Chronicles.

The series is based on Terry Brooks' Shannara titles.

I admit, I've not read them. Back when I was first discovering fantasy after reading some Tolkien in about 2002-2003, I heard of some of the more success ones in that 'vein' of fantasy: The Wheel of Time, The Sword of Truth, Shannara... but I never actually checked out Shannara first hand. I did read the short story (or was it stories?) that was included in the anthologies Legends, and Legends II in the past few years on my ereader. I found it interesting enough but some of the names a little silly.

Anyway, around the time I was uncovering fantasy, a friend of mine read the very first Terry Brooks Shannara book, called The Sword of Shannara. And he hated it. He was surprised that the Tolkien Estate didn't sue Terry Brooks because of that book. It bore a far too-familiar resemblence to parts of Tolkien's writings (a water monster with tentacles in a particular scene and scenario comes to mind on hearing his review). Because of this, he continued no further, and aside from the short story (stories?) I read, I didn't either.

Until recently, with that MTV series.

I hadn't checked it out; as the idea of fantasy series on MTV is laughable to me. I may some day, when it comes on Netflix if it finishes without being canceled I may give it a go, but I'm not going out of my way to do so. But yet something about it was interesting to me.... oh, before I proceed I should mention that the TV show is based on the second of the original trilogy's books, which is called The Elfstones of Shannara. (the original trilogy is The Sword of Shannara, The Elfstones of Shannara, and The Wishsong of Shannara). Most likely to avoid Lord of the Rings / Tolkien comparrisons, possible backlash etc. So I did a little bit of internet research and have found out that a) you don't need to read Sword to understand Elfstones. It seems to me, as of this writing, that the books are 'generational'. Think of The Hobbit to The Fellowship of the Ring. Loose connections, but not 'sequential' ones. Also b), that Sword is Brooks' worst book because of that, but from Elfstones onwards, his world grows and blooms beyond a 'Tolkien rip-off'; and can actually get quite good. It's just bad luck that the first book happens to be 'the bad one'. Heck, if you look at the recently re-published and inevitable tie-ins, its' re-branded so that Elfstones and Wishsong are "The Shannara Chronicles" and Sword and The First King of Shannara (Terry Brooks' Hobbit to the original trilogy / chronicles) are listed as "Before Shannara".

So, with that in mind, I did a little more digging online and lo! I have found the first two chapters from Elfstones online for free (via publishers website); which was my ideal starting point with this new information. I read them and I enjoyed them. Truth be told, I enjoyed them to the point that I bought Elfstones and Wishsongs as ebooks [space, the format that the physical books are commonly found in, price,..etc...etc..] So far, my opinion is, that it's good 'classic' fantasy, in that The Wheel of Time was good classic fantasy (aka, Tolkien-style). But if you want or expect 'more', like how A Game of Thrones 'evolved' fantasy, as I mentioned above, then it may not be your cup of tea, Or, it may feel a step backwards in that regard.

So I've got the Shannara books (well, ebooks really) on my radar, avoiding The Sword of Shannara and any prequels. So I'll be starting with Elfstones and going to the end from that point, chronologically of the books. Ultimately, if mTV and Terry Brooks wanted people to start reading the books, they succeeded. With me at least.

Here is my Shannara reading plan, starting with Elfstones and avoiding anything that occurred before that point in the story. Hey, if MTV can start there, then so can I:

HERITAGE OF SHANNARA [available as hardcover / ebook omnibus under this name. I'll get the ebook]

HIGH DRUID OF SHANNARA [available as hardcover / ebook omnibus under this name. I'll get the ebook]


DEFENDERS OF SHANNARA [no word yet, but possibly an ebook bundle should be available approx a year after The Sorcerer's Daughter releases, or is out in mass market paperback. Possibly get ebook bundle, or individual]

Please say you have never watched the MTV show. I totally agree that "Sword of Shannara" is a cheap duplicate of LotR (something Brooks admits to trying to do) and that his later books he got more comfortable exploring what made his stories different.

But holy hell, The Shannara Chronicles is the most disgusting discredit to source material I have ever seen! And I'm fully aware about the internet's "Rule 34"