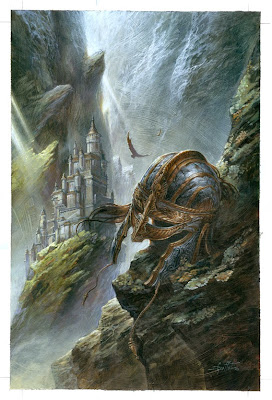 This post was initially written by Shaun Gunner of the Tolkien Society.

Since 2007's The Children of Hurin, many, myself, included, have wondered if that could be our journey into Tolkien's realms of Middle-earth / Numenor / Beleriand; barring anniversary, illustrated or deluxe publications of currently existing material. Here's hoping that some of this material could eventually get published, either as a compilation (Unfinished Tales: Volume 2??), or a a dedicated book.

Tolkien is not exactly known for his brevity: The Lord of the Ring ranks with War and Peace, The Count of Monte Cristo and Gone With The Wind as the butt of jokes for its length; whilst Tolkien beats the Bard in terms of word-count. Without even including The History of Middle-earth or academic texts, the works of the Professor surpass over one million words. It may seem strange that I would wish for some more, but I do.
Saying that, there are only five main Middle-earth books: The Hobbit, The Lord of the Rings, The Silmarillion, Unfinished Tales and The Children of Húrin. C.S. Lewis gave his readers seven books in The Chronicles of Narnia – a template that has since been followed by both J.K. Rowling and George R.R. Martin – whilst Discworld aficionados have been spoilt with 40 books. We, however, have to console ourselves with unfinished musings, scattered fragments, and contradictory passages.
Putting aside questions of Legolas’s hair colour, the wingedness of balrogs, and the exact nature of Tom Bombadil, let us imagine that discovered in a loft there were a bundle of original Tolkien manuscripts to be published in the forthcoming years. What would we like to be in that bundle?


The Fall of Gondolin

Although a chapter of Tolkien’s posthumous tome The Silmarillion – “Of Tuor and the Fall of Gondolin” – is dedicated to Gondolin’s downfall, sadly the longer version of the story remains unfinished. An early version was published in The Book of Lost Tales Part Two but, at 50 pages long, it isn’t quite at the full length we would like, nor does its story perfectly marry the condensed version in The Silmarillion. Just as The Children of Húrin was published in 2007, a similar version of “The Fall of Gondolin” would be perfect; a glorious drama of love, treachery, bravery and war, The Fall of Gondolin would make for a gritty companion piece to The Children of Húrin.

We know that five wizards were sent to Middle-earth, including Saruman, Gandalf and Radagast. But the only things we know for certain about the other two is that they were Blue and they lived to the east of Middle-earth. Tolkien changed his mind on their names, their date of arrival, and whether they were successful in their quest against Sauron. Precious little is known about these two wizards and it would be tantalising to hear about their personalities, what cultures and peoples they encountered, and what adventures they became embroiled in. If The Hobbit and The Lord of the Rings are quests surrounding Gandalf, just imagine what the Blue Wizards might have got up to.

The story of the Second Age is dominated by Númenor and Númenóreans. But, except for Númenor’s foundation and downfall, very few paragraphs are devoted to describing it in detail – many of the Kings and Queens are simply names on a list whilst we even lack the names of Isildur’s wife and mother. All we really have to go on is the Akallabêth and three chapters in Unfinished Tales; entire millennia pass with scant mention. Do you know anything about the rule of Tar-Telemmaitë? No, me neither.

Mariners and ship-faring have an interesting dichotomy in Tolkien’s stories. On the one hand ships are used as a powerful device at key moments in Tolkien’s stories: the Corsairs of Umbar, Ar-Pharazôn’s attempt to invade Valinor, Fëanor’s burning of the ships at Losgar, Frodo’s parents drowning, Eärendil sailing to Aman, Frodo leaving Middle-earth. Yet, although ships are used as a form of transport in Tolkien’s works, very little is told of the journeys themselves. Even more curiously, the peoples of Middle-earth – save for Aldarion and Basso Boffin – were surprisingly incurious about the world they inhabited. What was life like aboard the ships? Were there ever great naval battles with another power? Did any sailors ever get left behind to start a colony in far-flung reaches of Arda? Essentially I would like Tolkien’s version of Prince Caspian.

Putting aside Mîm the Petty-dwarf in The Silmarillion, and Gimli in The Lord of the Rings, our only real extended knowledge of dwarves is in The Hobbit. Even there, our knowledge of dwarven clothing and culture (save for the colour of their hoods) is pretty patchy at best. More importantly, four of the seven dwarf clans – Ironfists, Stiffbeards, Blacklocks and Stonefoots – we know absolutely nothing about apart from their location in the east (cf. Blue Wizards above). We deserve to know as much about dwarves as we do about elves, men and hobbits.

Rather than a specific story this is a general observation. Clear dates are given for the invention of the Tengwar, the creation of the Silmarils and the growing of pipe-weed in the Shire. By the end of the Third Age the Shire appears to have developed a sufficiently sophisticated legal system to declare someone dead and auction off their goods, but there’s no electricity. What about the steam engine? Or the cannon? Why were these apparently sophisticated civilisations not advancing technologically?

“For my part, I consider that it will be found much better by all Parties to leave the past to history, especially as I propose to write that history.” – Winston Churchill
History is written by the victors, so it is said, and orcs are very much Middle-earth’s losers. Merry and Pippin’s capture by orcs, and Sam’s interactions with them at Cirith Ungol, provide a remarkable glimpse into the orc psyche. Far from being brain-dead, useless servants as can often be the caricature, they are shown to be intelligent and thoughtful (albeit still probably misguided, if not outright nasty). This image provides an amusing example of how a history written from the perspective of orcs might look.

The first experience of Middle-earth for many children is a sense of awe, amazement, and curiosity at seeing the fantastic world sprawling out from beneath their fingers in either Thrór’s Map or the fold-out map of Middle-earth at the back of The Lord of the Rings. These maps are beautiful and fascinating: I am sure that thousands and thousands of people around the world have spend hours poring over the maps, if not trying to redraw them themselves. The “Map of Rohan, Gondor and Mordor” provides the level of satisfying detail that I want for all of Middle-earth: what is north of Forochel? Where is Hardbottle? What are the cities of Harad? Even more than that, some artists over the years – such as the late Karen Wynn-Fonstead – have made their own maps of cities such a Minas Tirith and Gondolin. Such level of detail from Tolkien himself would be hungrily and joyously devoured by readers.

when the world is old and the Powers grow weary, then Morgoth shall come back through the Door out of the Timeless Night; and he shall destroy the Sun and the Moon, but Eärendel shall come upon him as a white flame and drive him from the airs. Then shall the last battle be gathered on the fields of Valinor. [..] Thereafter shall the Silmarils be recovered out of the sea and earth and air [..] and with their fire rekindle the Two Trees

Some of the details of the Last Battle, or Dagor Dagorath, as included on p. 165 of The Shaping of Middle-earth.
Christopher Tolkien decided to remove references to the Second Prophecy of Mandos – including the Last Battle – due to its inconsistency with later revisions of The Silmarillion and the published text. Fellow blogger Michael Martinez notes that “Without a clear outline for the War of Wrath Christopher Tolkien struggled to produce a coherent ending for the story” – I would dearly love for such a clear outline to exist.