The problem with being a reader, and one who visits bookstores often, is that you constantly discover new books and authors. When your reading pile is large, that can be a problem. However, the obvious benefit is that you get exposure to lets of (hopefully) good books. That being said, one author who I've heard of in passing a few times over the years but haven't read yet, is Guy Gavriel Kay. Tolkien fans may recognize the name, as he worked with Christopher Tolkien on a little book called The Silmarillion. Wikipedia states:

When Christopher Tolkien needed an assistant to edit his father J. R. R. Tolkien's unpublished work, he chose Kay, then a student of philosophy at the University of Manitoba, whose parents were friends of Baillie Tolkien's parents. Kay moved to Oxford in 1974 to assist Tolkien in the editing of The Silmarillion. There he learnt a lot about writing and editing, and later admitted of Tolkien's influence, "to be successful in fantasy, you have to take the measure of Tolkien—work with his strengths and away from his weaknesses"
After which, he began work on his own fiction, which includes: The Fionavar Tapestry (The Summer Tree, The Wandering Fire, and The Darkest Road) concerning five people from our Earth in a parallel world, "the first of all worlds,"

The Lions of Al-Rassan The story of two military strategists (one an El Cid analogue) in a medieval Spain analogue. Last Light of the Sun  A story based on the Erling (Viking analogue culture) invasions of Anglcyn (which is an analogue of Saxon-England) and Cyngael (a medieval Wales analogue) during the rule of Aeldred (an analogue of Alfred the Great). Ysabel A modern urban fantasy set in Provence, centering around a teenage boy and his encounters with characters from the distant past. Explicitly if lightly linked to The Fionavar Tapestry, featuring two of its main characters as supporting roles. 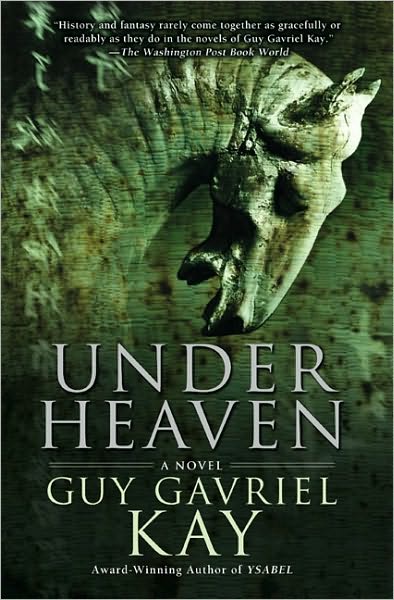 Under Heaven A story based on the 8th century Tang Dynasty and the events leading up to the An Shi Rebellion.

River of Stars (set in same world was Under Heaven) A story set in the same timeline as Under Heaven, based on the 12th century Song Dynasty and the events around the Jin-Song Wars and the transition from Northern Song to Southern Song.
Many of his novels are set in fictional realms that resemble real places during real historical periods, such as Constantinople during the reign of Justinian I or Spain during the time of El Cid. Those works are published and marketed as historical fantasy, though the author himself has expressed a preference to shy away from genre categorization when possible.
Some of his work sounds pretty interesting and unique, and not 'staple' or 'formulaic' fantasy. Authors such as Brandon Sanderson, Neil Gaiman, George R.R. Martin and Patrick Rothfuss have mmixed up the genre a little bit so it doesn't feel like you're reading Tolkien. Reading Tolkien is perfectly fine - if the author's name is Tolkien. Many (but not all, such as Earthsea) fantasy books from the '60s to the '90s have 'imitated' the Tolkien style of writing, so it's good to see different approaches and styles in the field of fantasy.
Anyway, not to veer too far off track here...I will most likely check out some of Kay's works once my reading pile calms down a bit - no more 'large' series for instance. So that may be a while yet, but I'm looking forward to getting there.
If any of you have read Kay, please share your non-spoiler thoughts below. Oh, and thanks to the Wikipedia page on Kay for assistance for this post.
Posted by insurrbution @ 17:10