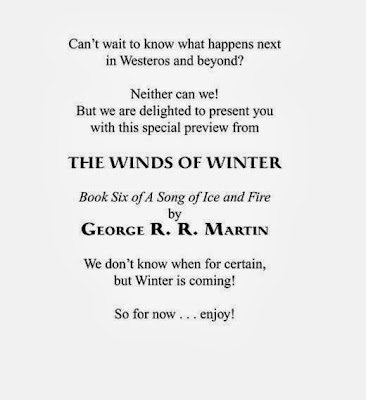 It's going to be a Barristan Selmy chapter. Don't know details beyond that at this point. It may be 'titled' ("The Queensguard" or something) rather than 'named' ('Barristan')

If you want to get into the series, read past the jump for more.


Here are the first five books in the series thus far of A Song of Ice and Fire:

Book One: A Game of Thrones

Book Two: A Clash of Kings

Book Three: A Storm of Swords 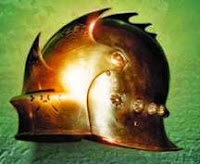 Book Four: A Feast for Crows

Book Five: A Dance With Dragons 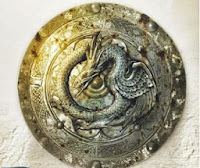 Remember to use those ISBNs!

Since we are in between seasons of the HBO series (season four will air in spring '14) as well as books, now is the perfect time to catch up on the book series, especially with American Thanksgiving and the the December Holidays such as Christmas coming up.


*UPDATE* as per my comment, all ISBN is correct. It appears that the ISBN 10 yields the best results when being searched. If a 10 or 13 doesn't work, try the other.
Posted by insurrbution @ 22:38

The Storm of Swords ISBN is incorrect; I posted A Feast For Crows twice.

A Storm of Swords is:

I'll correct this in the actual entry when I'm on a PC next.