The Spirit of St Louis

Make no mistake, I am first and foremost an Ottawa Senators fan..but that's in the East. After seeing St Louis' sports highlights during last season, especially during the playoffs, they are now my favorite team in the West.

They are the only team from the expansion yet to win a Stanley Cup. And this may be their year.

Before I go further, I should add that at work I entered a hockey pool (separate, next post). I chose the Blues as my team (basically, 'what if Ottawa doesn't go all the way?' I'd love them bu they aren't really a 'playoff team'. And besides, they are in the East, Blues in the West so I don't feel guilty following another team too) and Brian Elliott as my goalie.

EA games ran a simulator that had the Blues beat the Penguins in Game 6 of the Stanley Cup Finals, winning the Cup. Here is a rundown by EA games [this is the end of the note by me, click the jump to see the stats EA came up with]. 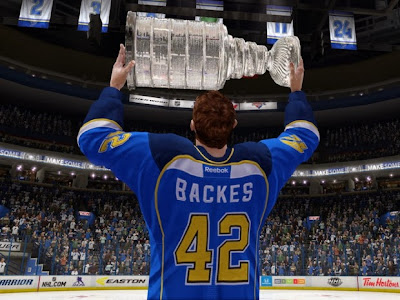 The puck is almost ready to drop on the latest NHL season and the EA SPORTS NHL team is keeping tradition alive with another season simulation. With new league alignment, new rosters, and new rookies all factoring into the equation, we’ve unleashed NHL 14 to battle it all out and decide which franchise will rise to the top when the dust finally settles next year.
Eastern Conference:
Not only was the Eastern Conference’s landscape changed with new divisions, but the addition of the Detroit Red Wings injects even more top-tier talent for teams to face off against.
Metropolitan Division:
The Metropolitan Division saw star-power propel the top three teams into the playoffs, with the Penguins winning the division title. The ever-improving Islanders stepped in to snag the Wild Card spot.
Atlantic Division:
The Atlantic Division’s playoff spots were filled completely by Original Six teams, with the Bruins hanging their first-ever Atlantic Division title banner from the rafters. The Leafs snatched up the Wild Card for their second postseason berth in as many years. 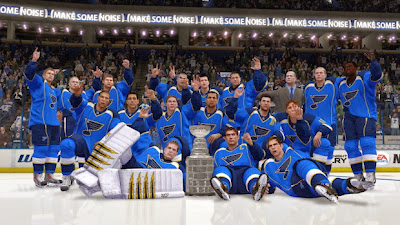 Western Conference:
Stacked with talent and boasting the previous two Stanley Cup Championship teams in the mix, the Western Conference welcomed the Winnipeg Jets as it tried to keep the Cup in the West for a third-straight year.
Pacific Division:
In the Pacific Division, three playoffregulars cracked the NHL’s second season with the L.A. Kings laying claim to the new division’s inaugural title. The Edmonton Oilers finally made good on their wealth of prospects, picking up a Wild Cardberth.
Central Division:
Capturing the President’s Trophy for a second consecutive year, the Blackhawks aimed to do the same with the Cup while the Stars also punched their ticket into the postseason with a Wild Card finish.
Stanley Cup Finals: St. Louis Blues vs. Pittsburgh Penguins
With the regular season in the bag, the St. Louis Blues stepped up to battle their way into the Stanley Cup Finals. After facing off against some of the league’s most talented skaters on the Pens bench, it was the Blues who ultimately proved they had the deeper team game when push came to shove. Coming together to down the Penguins in Game 6 of the Finals, St. Louis hoisted its first Stanley Cup in franchise history.
Stanley Cup Winners: St. Louis Blues