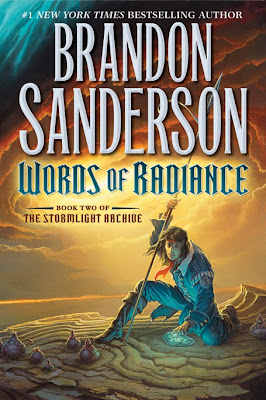 Here is the cover art for Words of Radiance, Book 2 in Brandon Sanderson's Stormlight series by Michael Whelan.....


(this is for the American / TOR edition). As of now, Book 2 is scheduled to be released Jan 21 in hardcover, ebook, audio Cd, etc... edition, with a mass market paperback expected to follow about a year later. 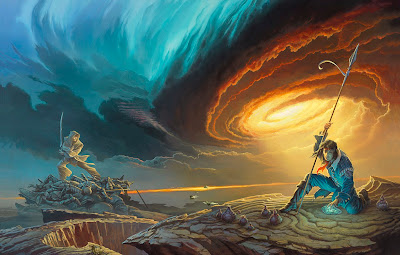 Having met the challenge of a posthumous collaboration with the great Robert Jordan to complete his classic, bestselling
fantasy series The Wheel of Time® with three #1 New York Times bestsellers in a row, Brandon Sanderson is at last free
to return to the decade-spanning task of creating his own multi-volume epic, one that he hopes will make a comparable mark on the field. That epic is The Stormlight Archive and it began in 2010 with Tor’s longest, most elaborately embellished novel ever, The Way of Kings.
In that first volume, we were introduced to the remarkable world of Roshar, a world both alien and magical, where gigantic
hurricane-like storms scour the surface every few days and life has adapted accordingly. Roshar is shared by humans and the enigmatic, humanoid Parshendi, with whom they are at war. Among those caught up in the conflict are Brightlord Dalinar Kholin, who leads the human armies; his sister Jasnah, a renowned scholar; her student Shallan, a brilliant but troubled young woman; and Kaladin, a military slave who, by the book’s end, had become the first magically endowed Knight Radiant in centuries.

In Words of Radiance their intertwined stories will continue and, as Sanderson fans have come to expect, develop in unexpected, wonderfully surprising directions. The war with the Parshendi will move into a new, dangerous phase, as Dalinar leads the human armies deep into the heart of the Shattered Plains in a bold attempt to finally end it. Shallan will come along, hoping to find the legendary, perhaps mythical, city of Urithuru, which Jasnah believes holds a secret vital to mankind’s survival on Roshar. The Parshendi take a dangerous step to strengthen themselves for the human challenge, risking the return of the fearsome Voidbringers of old. To deal with it all, Kaladin must learn to how to fulfill his new role as leader of the restored Knights Radiant, while mastering the powers of a Windrunner.

With this second book, the Stormlight Archive grows even more richly immersive and compelling. Sanderson’s fans, old and new, are likely to lift it at least as high on the bestseller lists as its predecessor.
Posted by insurrbution @ 17:19