(ed note: my next post will be about Bluesfest...still making that list!) I finally got around to seeing Man of Steel, the first good Superman movie since 1978. Here's what I thought.


There have been quite a few Superman movies over the years. For me, because of my age, Superman began on-screen in 1978. Christopher Reeve made us believe a man could fly. Margot Kidder was a great, strong female lead as Lois...though at times clueless. Gene Hackman is a great actor, but his Lex Luthor was a bit 'off'. And there was unintentional campyness due to the year, but still - it was a great movie.

The director also wanted to due Superman II but things fell through and Superman II got changed...for the worse. His version came out a few years ago, and is a vast improvement. Then there was Superman III and Superman IV which don't deserve to be remembered. Then in 2006, Superman returned to the big screen in a semi-sequel, Superman Returns. "A what?" you ask. Well, it's another third Superman movie, ignoring some events of Superman II whilst others are 'canon' to that film. All you need to know is this - Superman and Lois got cozy up at the Fortress, Lex was there and found out about crystal tech, more about Superman. It would have been better if instead of making Superman Returns, remake the first film (because that's what Returns felt like at times), or an all-out reboot. 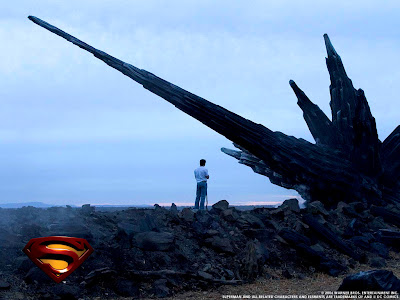 So many things were wrong with Superman Returns! First, let's about Superman himself. Brandon Routh did a good job with what he was given. He was very good at "Clark Kent" but as Superman? Count the punches or fight scenes int his film. Not Brandon's fault, but it's the Superman character. Kate Bosworth as Lois = no!! Completely miscast. And the kid? When we saw him, given that he is the same age that Superman has been away from earth...yup, you guessed it. Kevin Spacey as Luthor. Darker than Hackman's but Lex is still in these Superman movies, and is (still) in love with land. Not to mention the kid proving he is Superman's son one minute, then being useless the next. And the hospital bit was dumb. Other annoyances throughout the script, but those are the standouts.

But what about the good?
The film did have a very good teaser trailer (I usually only watch teaser trailers for a big movie I'm excited about that I'll know I'll see). It did a very job of mixing old and new - showing us some footage of the new film, while playing music and voiceover from the original '78 film.
I also really dug the 'look' of the film. I believe it's called production design, but here are some examples of what I mean.


Quite good to look at. Frank Langella was also quite good as Perry White. However, Superman Returns did not perform at the box office as well as Warner Bros. had hoped. So now..... Here we are with Man of Steel (which is one of Superman's nicknames. Batman is 'The Dark Knight'; Superman is 'Man of Steel', 'Last Son of Krypton'...) And we are starting off completely fresh. Before I proceed, when one thinks of superman, what do they think of? Planet Krypton being destroyed. The Kents finding Kal-El. Some time on the Smallville farm. Fortress of Solitude. The Daily Planet. Kryptonite. This film is a reboot, so you get some of those elements although in different ways or methods. A most obvious one is the Fortress of Solitude.

The film is also really well cast. If Christopher Reeve made you believe a man could fly, then Henry Cavill will make you believe a man can fight. Unlike Superman Returns, Man of Steel actually throws a punch! Quite a few, actually. Amy Adams was great as Lois, but the big kudos have to go Russell Crowe as Jor-El, Michael Shannon as Zod, and Kevin Costner as Jonathan Kent. Some of the scenes between Clark and Jonathan are really emotional.
Man of Steel reminded me of Batman Begins in terms of execution - it's a superhero origin film which has the movie going forward with the main plot, but the 'origins' are explored via flashbacks throughout. The film is powerful, on emotion and spectacle. Speaking of origin, the decision to use General Zod as Superman's first foe in these films makes sense with his origin, arrival on Earth, as well as the destruction of Krypton.


What I enjoyed most, was that the film felt fresh, modern and bold. This is the Superman of comics. There is no campyness here - no bumbling villain sidekicks, no bald men trying to profit off land....
For the first time since 1978, we finally have a good Superman live action movie.  And a more modern suit. Bring on the sequels.
8/10

Make your own glyph at : http://glyphcreator.manofsteel.com/

First movies in franchises usually aren’t the best, which at least has me hopeful for the next installments. Good review.

If these are Superman movies stop at three, got my fingers crossed that Darkseid or Doomsday will be saved for the third to 'test' the character, much like how Bane did to Batman in The Dark Knight Rises.