A Memory of Paperbacks 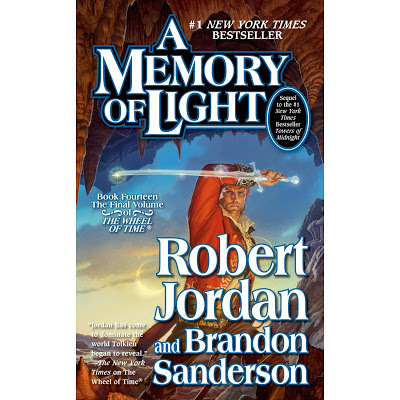 The final mass market paperback I will ever buy is coming out later this year....


At 1168 pages long, the final new mass market paperback book will be released on Dec 31 of this year. Now that I have an ereader, I won't buy any more mass market paperbacks (excluding a few Stephen King novels). I still like books, and will buy them but the nicer 'trade' editions and hardcovers.

Once I finish A Memory of Light will do a massive comprehensive post; but I've been buying The Wheel of Time in paperback since about 2003 or so. Crossroads of Twilight was the latest title mentioned. I could have gotten them in hardcover, but at 10 books...paperback was more convenient on space and cost. I've been intent on completing the set in that style, as I don't like to mix and match paperback and hardcover within a series (Harry Potter, for example) and I like to keep the cover art in the same design scheme.

Now, about 10 years alter, I will get the final book of The Wheel of Time. The end of an era in storytelling, and book buying.

[for the 'nice' new trade paperback editions by the North American publisher, keep following my blog. The next info (ISBN & release date) being 'waited' on is Crossroads of Twilight]
Posted by insurrbution @ 21:27

Some books costs less in e-book form as well.

There is that too!

I just generally prefer an ebook over the 'cheap' mass market paperback is all.