The Hobbit: How Two Became Three 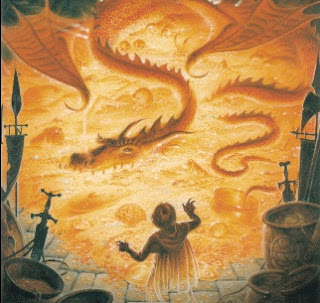 Very recently, it was announced that The Hobbit would become *three* films instead of a two-parter. This post is my reflection on that...


I won't cover the history of The Hobbit movie(s) here, just my reaction and thoughts to the move from two films to three. Initially, The Hobbit was to be become two films. "why two, for a book that's under 400 pages long?" you ask? Well, the complete adventure of Bilbo from his Hobbit hole back to it was to be filmed, however, other material that happened in that time was going to be filmed also: what Gandalf gets up to, White Council meetings, etc...so you'd have Bilbo's tale with other goings-ons. My guess of where Part 1 would end is the escape from the elves via barrels.

Days ago, it was announced The Hobbit would be three films. My reaction was both good and bad. Good: yay! We get 3 movies! Bad: Why? is he milking it? Can enough material be filmed to cover three films? Is it needed?? Peter Jackson said that there's material in the appendeces to Lord of the Rings referencing events back during the time frame of The Hobbit, but was not in The Hobbit novel. I'm not sure how far rights and ownership can go, but perhaps even some of this may be covered: http://en.wikipedia.org/wiki/The_Quest_of_Erebor . Just an additional two cents....

It would seem that over the course of 3 films, Peter Jackson wants to show us what's going in Middle-earth 60 years or so before Lord of the Rings, and tell Bilbo's tale at the same time. One may argue that had a kind of similar approach be taken, Lord of the Rings could have been 6 films rather than 3. I like to think that for the Lord of the Rings Trilogy, Peter Jackson just wanted to tell the tale of The One Ring. but still, it'd be neat to think what else we could have seen in the films had been  instead of 3, with the ending being in the 6th.

I'm all for 3 films, so long as it works well with Bilbo's tale, and tying events up to Lord of the Rings. Peter Jackson and co. are not ONLY adapting Bilbo's journey. If they had, one (or 2) films would have sufficed, but they want to bring as much of Tolkien's world to life as possible, and making all the pieces 'fit'. Keeping that in mind, I look forward to seeing these films. Anyone who wants a straight up adaption of The Hobbit could potentially be disappointed. Keep an open mind and enjoy the ride.