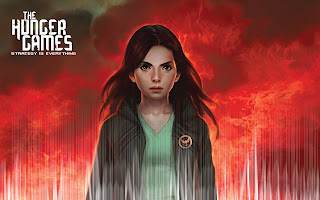 A few days ago, I finished reading Mockingjay, the third and final book in the Hunger Games Trilogy. For what I thought of the series, you know what to do...


"You're a w-" Oops. Wrong series. So what *does* Hunger Games have in common with Harry Potter? One's a 'fantasy', the other is more sci-fi / dystopian. One has a lead male protagonist, the other a female. One is told in first person narration, the other in third. The similarities that I can see, and why Potter fans have started the Games, is that both are fun, quick, addictive and immersive reads.

So a brief overview of the setting / story. The books take place in a place called Panem that used to be the US / North America. It's in the future of now (I'm guessing 50-300 years from now?). There are 12 districts, controlled by the wealthy and mighty Capitol. Those who are familiar with history, this may remind you of how the US came to be, with the colonies and all. There was a 13th district which was destroyed, by the Capitol because the Districts rebelled. To flex their muscle and keep the citizens in check, each year a teenage boy and girl from each district is forced to participate in The Hunger Games. During these events, the opponents must literally eliminate the competition in the televised do-or-die event. The author (if I'm not mistaken) got the idea for the series where she was watching TV. One channel featured live news coverage from the war, upon flipping, the other channel had a reality TV show, which had more viewers than the news.


The author describes in detail, while being vague enough to let you imagine, the world seen from Katniss' perspective. You climb inside her head, and we go with her as she thinks, acts, feels and reacts to the events transpiring. I prefer third person narration overall, but the author makes it work with first person throughout the trilogy.

The first book is about Katniss entering, surviving, and (spoiler-alert-but-not-really-because -there's-two-more-books-in-the-series) winning The Hunger Games. She does something near the end which unintentionally on her part, sparks the kindling for the flame known as 'rebellion'.

The second book is about the fallout and the building flames of rebellion against the Capitol. It's still about Katniss, but we get to see and learn more about Panem.

In the finale, the rebellion against the Capitol has reached its boiling point. With any finale, not all may agree or like the ending of something that ENDS, but how else COULD it end? Because it's the finale, the last half of the book will fly by.

The books aren't too predictable, and have the need for you to want to constantly read to see where the story will go and what twists and turns the narrative will take. The pacing is strong and fast, and doesn't slow down too often. Sure, in the first book Katniss wins the Hunger Games...but how? There's not many cliches, and in terms of the story being 'familiar' to some, there are some unexpected happenings along the way.

I enjoyed reading the books. They weren't the 'best thing ever written', nor was I expecting them to be. But they are a great read, especially considering the last teen series I read (Twilight) wasn't very good. There are instances where books are "intended" for younger readers are great reads, even for adults: Narnia, His Dark Materials, Harry Potter and The Hobbit, for instance. Hunger Games is one of those  And no, I haven't seen the film yet.

My next read is Stieg Larsson's trilogy of books (Girl With the Dragon Tattoo, Girl Who Played with Fire and Girl Who Kicked the Hornet's Nest)
Posted by insurrbution @ 11:56