"Winds of Winter": How's it coming along? 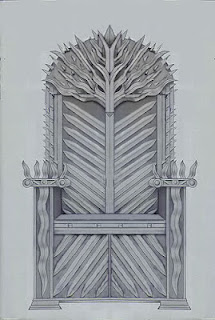 This post will 'collect' all info that is out there on the web at this point on Ice and Fire Book Six, Winds of Winter. Courtesy mostly of WikiPedia. It goes without saying that if you haven't read the first five, spoilers are head...Well, mild.

The previous installment, A Dance with Dragons, covered less story than Martin intended, omitting at least one planned large battle sequence and leaving several character threads ending in cliff-hangers. Martin intended to resolve these cliffhangers "very early" in The Winds of Winter, saying "I'm going to open with the two big battles that I was building up to, the battle in the ice and the battle at Meereen—the battle of Slaver's Bay. And then take it from there."

Martin confirmed in March 2012 that the final two novels will take readers farther north than any of the previous books: "What lies really north [The Land of Always Winter], we haven't explored that yet, but we will in the last two books."

The sample chapter on Martin's website is written from Theon Greyjoy's viewpoint and shows his interactions with Stannis Baratheon as they are camped in the snow on his march to Winterfell. Martin has also said that "you're definitely going to see more of the Others in The Winds of Winter".

At 2011 WorldCon, Martin read an Arianne chapter, during which she heads for Griffin's Roost to see the young boy who is calling himself Aegon. Victarion's chapter will take off five minutes after A Dance with Dragons, taking place on the eve of the Iron Islanders' surprise attack on the cities in Slaver's Bay. 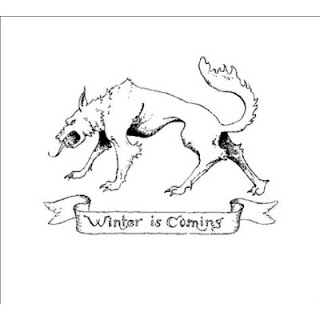 George R. R. Martin confirmed the following characters to have POV chapters in The Winds of Winter:

(Dance With Dragons Bantam paperback release coming in August will feature a sample of Winds of Winter. Not yet known if it will be one of the chapters mentioned above, or something 'new'.)

By June 2010, Martin had finished four chapters for The Winds of Winter, from the viewpoints of Sansa Stark, Arya Stark, and Arianne Martell. n July 2010, he added that an Aeron Greyjoy chapter had been moved from A Dance with Dragons to The Winds of Winter, accumulating to around 100 completed pages.

Martin believes the two last volumes of the series will be big books of 1500 manuscript pages each. With 200 finished pages by March 2012, Martin hopes to finish The Winds of Winter much faster than the fifth book. A realistic estimation for finishing The Winds of Winter might be three years for him at a good pace, but ultimately the book "will be done when it's done". Martin does not intend to separate the characters geographically again.

I think he's further ahead than he's letting on, and is having an easier time writing than when he was working with Books Four and Five  Also, books Six and Seven will be about the size of Dance With Dragons or Storm of Swords.

Email ThisBlogThis!Share to TwitterShare to FacebookShare to Pinterest
Labels: George RR Martin, Song of Ice and Fire, Winds of Winter