Twilight: WTF? (Why The Fame)


Now, here’s a topic that’s bound to get me some heat (by the fans, of course...) is Twilight.


Now, as fun as it is to ‘hate on it’ for the sake of disliking something because it’s popular, and cherished by females, I dislike it for actual reasons. A good part of the reason is “Why is it so popular? It’s not even good!”

I’ve read all four books. I know what Midnight Sun is. I’ve seen the first film. So yes, I have a good amount of experience with the ‘phenomenon’, which allows me to write this post and share some opinions on it. They are aimed at teenage girls, and I'm a guy in my 20s. Nevertheless, my thoughts...

I suppose it’s natural to start at the beginning, where it all began – the books. The first book, Twilight, came out awhile ago. It was either 2003, or 2005, I forget which of the two. I don’t know about you, but I certainly haven’t heard of it then. No, that’s not a reason for my ‘anti Twilight post’, bear with me. After all, Philosopher’s Stone came out in ’97, but it wasn’t until Goblet of Fire (published 2000) that I’ve heard of Harry Potter.


Anyway, the first book came out a while ago, and not only have I not heard of it at that point, but there was little to no fanbase. Then came New Moon. Then Eclipse (I think the best in the series). Then, finally, in 2008 was the series finale, Breaking Dawn Oh sure, Stephenie would also publish a novella that took place during Eclipse, and a guide encompassing everything, but Breaking Dawn was the book that ended the series, and stopped propelling the story forward.


Despite the fact that this section deals with the books, I’ve got to mention the films slightly. The last book came out in August of 2008, and the first film came out that November. I heard of, and seen what some of the books look like (not bad covers, I might add) by this point, as some book shops had been decorating and advertising. And with the film coming up, now the ‘hype’ was beginning, and sometimes when there’s a book being filmed, I like to ‘get a jump’ on it, and read the book(s) before the movie gets its theatrical release. I prefer reading a book than seeing the film it’s based on, for the most part.


So I had purchased the first book. Gasp. Yes, I know. The plot seemed interesting enough, and that’s kind of what got me to buy it – it’s a dark romance (I don’t mind ‘girl stuff’, unless it’s Sex and the City, a rom-com film or anything...materialistic.  Period historic drama films, or love stories I’m ok with. Yes, like Titanic for instance.) about a girl who falls in love with a vampire. The synopsis seemed interesting enough for me to get them. Then I read them.
In all honesty, they weren't as bad as people were (and are) saying, nor nearly as bad as the films (from what I've been told. I only saw the first one.) Now, I'm not saying they were good. There was just...nothing special about them. Read it. next. read that one next. No 'wow!' factor.
They weren't written too well, for one thing. The lack of variety of description. The overuse and constant reference to Edward's good looks. "His glorious face." Again and again. I kinda shrugged that off, as they were intended for teenage girls, and the story focuses on a female protagonist. Nevertheless, it got tiring. But then you get to things like Edward watching her sleep, cutting her brakes, etc. Just..really weird and abnormal behavior.
Portions of the first book were somewhat interesting to read, such as the bit where Bella senses there is something 'up' with Edward, but doesn't know quite what. The air of mystery, despite being brief, didn't last long. Was still kinda neat for the reader to know Edward's a vampire, yet no one else does.
Another thing I wasn't a fan of was the fact that the author 'changed' the vampires & werewolves. If they had been stereotypical vampires (die in sunlight, all that), it would have made the series a bit better, and a tad more 'dark' like say Vampire Diaries or True Blood (I have no experience with those, other than the knowledge of the use of 'classic' vamps). What we have here are vampires who can go out in the sun, but the sun reflects off their skin, kind of like diamond or crystal. (yet this was poorly depicted in the films); and the wolves who are able to transform at any point; sans lunar cycle. And there's the fact that in future books (especially New Moon) Bella can't survive without Edward. Not a good message to send to younger girls who have to deal with so much: 'if you're boyfriend leaves you, or you don't have one, what are you?' Yes, love can hurt. But when your protagonist is a weak female character who lies on her bed shrieking, or doing dangerous things, there's something wrong. There is tons I can say about Bella, but that would take up way too much reading and writing. Basically, she's a damsel in distress with not much of a life nor purpose outside of Edward (what does SHE want for herself in terms of life goals??). Compare her to other strong female characters, such as Buffy Summers, Katniss, Lisbeth Salander, or Hermione Granger, and you see where I'm getting at.
Now, Eclipse I don't have that much beef with, compared to the other two. 'Newborn' (freshly made and more fierce) vampires are present, there's a girl-vampire-werewolf love triangle. Ooh, more love you say. Well, love can get complicated. And there's a battle too! But....we don't get to read about it. Just the lead in and aftermath. Oh, nuts. Not to mention a slightly cliffhanger-esque ending segment. However, this is still Twilight and written by Stephenie Myer, so there are still problematic issues present. they are just less...glaring. This time.
Now for the feather that broke the camel's back - Breaking Dawn. The book is the longest of the four, yet not much happens. After reading Eclipse, we know Edward & Bella will get married. We know she will become a vampire but how / when? I think, for me, the biggest problem with Breaking Dawn was that it was a poor book to end a series with. There's no climatic battle (we got that in the second last book) after a big buildup. Everyone gets exactly what they want, with zero sacrifice. And it's too long. If it was about 100-200 pages shorter, it would have worked better. How or why it was split into two parts (Deathly Hallows envy, anyone?), is beyond me. Judging by the book, a single 2 hour & 40 minute - 2 hour and 50 minute film would have sufficed. There are some books that needed to broken up as films to allow as much of the story to be told as possible, or rather, represent the source material as best possible. Lord of the Rings got split into 3 parts. Deathly Hallows got 2 films. The book itself isn't overly long, yet lots of important events occur. 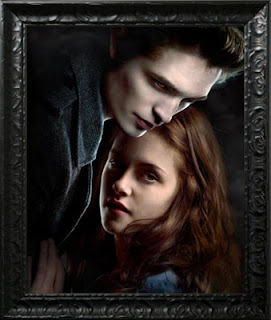 It is ultimately the films that led to my hatred of the entire Twilight franchise. With the books, it wasn't as 'in your face'. The films (from what I've heard people say, clips & trailers I've seen) are rushed and there's no thought put into them. Throughout this portion, the "Twilight vs Harry Potter" thing will come out strongly.
The first Twilight came out in 2008. The last will be in 2012. Harry Potter began in 2001, and ended in 2011. With Harry Potter, they took their time and made them into respectable adaptions, and enjoyable films; working at direction, writing etc. I'm not saying they are prefect films, but they are pretty good, and quite consistent. With Twilight, the scripts are poorly written, most of the films are poorly directed, and many other aspects aren't too good. Like...the acting. I'm not sure if it's the script, the acting or both, but wow. And I thought the newer Star Wars films were bad for that... Some of the actors are pretty decent with what they're given. For example, he may not be that good of an actor, and the dialogue cheesy as hell, but Robert Patinson as Edward Cullen *is* a good fit.
The effects are pretty bad looking too. For the 'Vampire Sunshine Reflection' it looks like the poor guys got doused in glitter. *facepalm*. Bella and the vampires both look too similar, due to them both being pale. And let's not mention wolf CGI, shall we? The lead actress who plays Bella is expressionless (aside from a wrinkle on her forehead, a sideways look / stare, and mouth slightly agape, or a frown which could be deep thought.). Then there's the random and sparodic shirt removal (of the guys, anyway..)
Another that bothers me about the whole thing, is the merchandising. With Harry Potter, Buffy, or other franchises popular with a (mostly but not exclusive) younger crowd; you never had a shirt saying Team Angel or Team Spike. Yes, Harry Potter has the typical movie stuff such as posters, t-shirts etc. But they never 'pitted' the fans against each other through the merchandising.
One thing I do i like about Twilight, is the soundtracks for the films. That is because of my varied taste in music, and that the person in charge of selecting the songs also did work on The OC, Grey's Anatomy, and others. So good indie music with a dark romance flavor. Yep, I'm a fan of the CDs.

In short, if Twilight is actually good (Breaking Dawn - Part 1 got a 23% on Rotten Tomatoes) like say Pride & Prejudice, Titanic or something else, I wouldn't be so against it. For some good vampire action, check out 30 Days of Night, the Underworld series, among others. For the younger crowd, I think the Babysitter's Club should be revamped and come back. It would be better morally.
Posted by insurrbution @ 18:50