Today is a big day for fans of fantasy - Oathbringer, the third book in Brandon Sanderson's 10-book Stormlight series is published today.

Sanderson is one of the best new(er) authors in fantasy, proving himself with a strong debut (Elantris) the Mistborn series, and now with Stormlight. The first two books, The Way of Kings and Words of Radiance, have both been well-received.

The Stormlight series is a different type of fantasy, with immense world-building and lore. It is the spiritual successor to The Wheel of Time series. They are both apples and oranges, however Stormlight follows down the path that The Wheel of Time began. They are not related by any means, I mean to say that the vein of fantasy is close. Please note that you can't (and shouldn't) compare Sanderson with Martin, or Stormlight with Ice and Fire / Game of Thrones.

So whether or not you've read The Wheel of time, if you like fantasy period, be sure not to miss the Stormlight series. Book 4 is expected in 2020.

Well, I promised you all an update, so here it is!

We enjoy taking trips, and thought we were due for one. Also, my uncle had a wedding during then. So, the purpose of the trip was for the wedding, although we greatly elaborated on it by doing more sight-seeing and vacationing. Needless to say, we both want to retire to Cape Breton Island [seriously – hop on google images. Or rather…don’t….the less people there the better!]

It was great, great fun – the entire trip. Our Escape performed admirably and kept us going along the way. As did McDonald’s – their coffee, muffins and other things for ‘road travel’ were definitely welcome. Plus, they also have the Monopoly going on, as well. So there’s that.

That aside, “life” has been happening! Hard to believe we already into November. Winter, and Christmas, are coming.

On the reading front: currently reading Exploring the Hobbit at home, as a book. When ‘on-the-go’ it’s The Heritage of Shannara on the e-reader. Will keep you posted about my reading habits following those books.
On the TV front: currently working my way through Ray Donovan Season 3 (I switch between that and Suits, once I finish a season of each.). Looking forward to the final season of Longmire coming next week, as well as The Crown in December.
On the movie front: This weekend is Thor 3, or “Marvel Movie #___”. Looks like it should be good.

Let me think of what other ground I wish to cover…

Still not sold, or convinced, of Nintendo and the Switch. Couldn’t get a SNES Classic. Still hard to get amiibo. Sorry, guys – I’m finished now. I’ll keep getting 3DS games that interest me, but following that, my Nintendo support ends when the 3DS ends. Because of that, I won’t give them money for a Switch.

I beat Zelda: Breath of the Wild (Ganon, that is. With all the Divine Beasts, my Ancient Armor fully upgraded, as well as an Ancient Bow and Ancient Arrows…I made short work of him. Plus, Stasis+ does briefly work on him! Not long, but long enough to get a shot in.) Primarily, because a little bit more of the game opens up once you do so (a few more pictures, ‘boss’ tracker, etc..) as well as I believe the upcoming DLC#2 is meant to be played after the main game. So really, it was spoiler prevention, as well as being up-to-date. Sometime in the future I’d like to play it again, from scratch, with both DLC’s already being out to see how it differs.

For quick half hour gaming sessions I’m going through Mario Maker on expert, with the intent of unlocking more amiibo Mushroom characters. I really wish there was a way to filter out some crap courses. It’s a very good concept, Mario Maker – though more could have been done with it; primarily the ability to ‘fill in’ parts of a level with water. Or, choose what music you want to hear when. It’s no biggie, but it’d be neat to hear the different music tracks when playing through different level types. And speaking of Mario Maker, the wii u, etc – farewell, miiverse!! I’ve never really used you, but I enjoyed seeing the drawings, as well as the feedback on my levels that I’ve designed. So to anyone who has played my through my levels and contributed feedback and/or art via miiverse – thank you. My goal with the game was to create ‘faithful’ Mario levels while throwing in a few new elements here and there, primarily in regards to the tools available, as opposed to types of levels.

I have decent backlog of my some 3Ds and PS4 games. The next games I’d like to get are: Fire Emblem Warriors, Hyrule Warriors, Mario Kart 7, New Mario 2 and Horizon: Zero Dawn Complete Edition. I’d also like to add Shadow of War, though the ‘complete’ version. Oh, and there’s the new Secret of Mana.

So that’s pretty much all I have to say….. Or can think of.

I owed an update. I could have done a few blog posts here and there, but, as I said – life!

Oh yes, and I’m working on a book on top of all that I mentioned.
Posted by insurrbution @ 10:00 No comments:

I owe you a general update, but first up, is the info about the new illustrated editions of Fantastic Beasts.

The newly illustrated edition is now available in both hardback, and a special edition (hardback with slipcase).

“This glorious new edition of Newt Scamander's Fantastic Beasts and Where to Find Them (considered a classic throughout the wizarding world) features an extraordinary array of magical creatures, from Acromantula to Yeti via ten different breeds of dragon - all beautifully illustrated in full colour by the brilliantly inventive, Greenaway Medal shortlisted Olivia Lomenech Gill.
Famed Magizoologist Newt Scamander's years of adventure and exploration have yielded a work of unparalleled importance, admired by scholars, devoured by young witches and wizards, and even made available to Muggles in the early years of this century. With this dazzling illustrated edition, readers can explore the magical fauna of five continents from the comfort of their own armchairs. Fantastic Beasts and Where to Find Them is essential reading at Hogwarts.
This new edition features the fully updated 2017 text - which includes new profiles of six magnificent beasts that inhabit North America and a new foreword by J.K. Rowling, writing as Newt Scamander.”

The description for the deluxe edition adds: “This deluxe edition is a must-have for any Potter fan. It comes with a gorgeous art print in a beautiful slipcase”.

Here is the cover art and info for the standard edition: 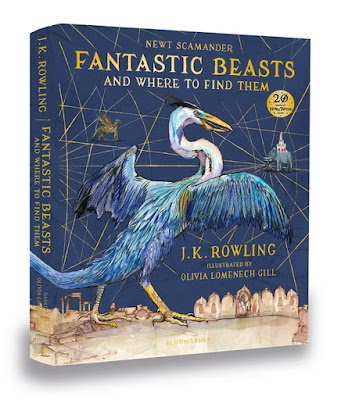 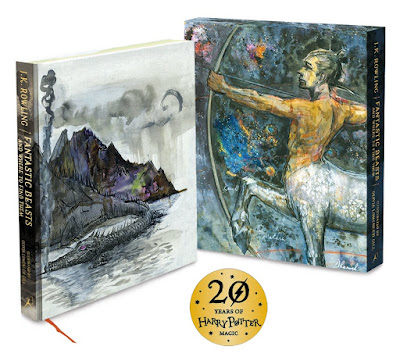 As you can see, they look as if they’ll match the illustrated Harry Potter books (both in hardback and special edition formats). As mentioned above, it features new and updated text compared to the original edition. The Tales of Beedle the Bard will also receive a new illustrated edition, as well [in both hardback and special edition formats.] which will arrive next year. Although, nothing yet for Quidditch Through the Ages, though it may be too early to tell at this point. Also, it’s too early to know if Beedle the Bard will have any changes to the text. 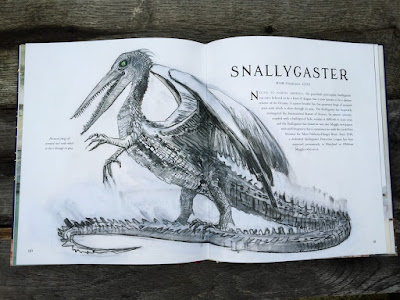 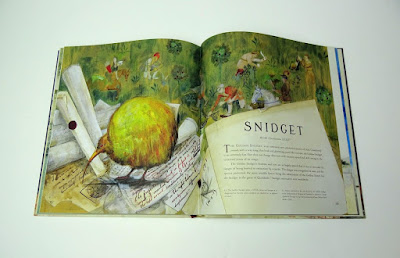 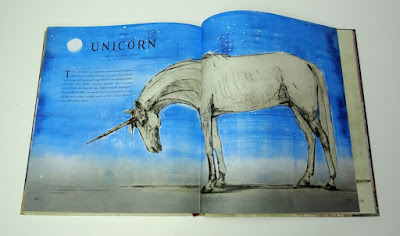 Also for next year, is the illustrated edition of Goblet of Fire.

It definitely looks like a great piece of art, much the same way that Jemima Catlin’s illustrated edition of The Hobbit is.