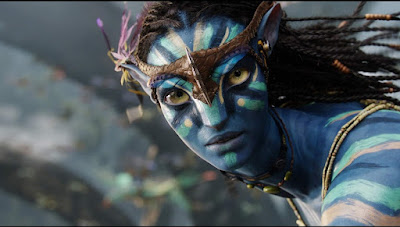 Today marks the 10th anniversary of James Cameron's Avatar (no, not the incredible Nickelodeon animated series, nor the crappy live action adaptation of it called The Last Airbender - which, I admit a better title to avoid confusion; though it's associated with that terrible film).

The story should be the driving force of any film, and the story for Avatar.....well, it's been done before. Quite a few times actually. Cameron did a similar approach with Titanic - "Romeo and Juliet at Sea", essentially.

Truth be told.....not that bad. Avatar was a technical marvel at its time, with the 3D aspect being a 'bonus.' In fact, virtually every major blockbuster from 2010 - 2017 (when 3D started to fizzle out) was made into 3D - usually converted in post-production after the films have finished shooting (in 2D). By today's standards, it's not quite the technical marvel. Nor is it dated. At this point, it feels like.....just another movie.

Upon my viewing today, I've come to realize that Avatar's accomplishments aren't in the 3D department, but the technical field itself. You can't help but marvel at the visuals, as well as the fact that everything is visually original. Sure, the story is nothing new (it's essentially Pocahontas) but everything you see (and hear) is. The Na'vi language and cultute is original. The plants, and animals on Pandora are impressive and quite unique. In that sense, you can appreciate the time, effort, and talent that went into making it. I felt drawn in, in a similar manner as when I watch Peter Jackson's extended Lord of the Rings trilogy.

I would not say that Avatar is among my favourite movies, however I enjoyed it enough. Despite a contrived and derivative plot, it shines in the technical department. I enjoy it 'enough' to watch it once in a while (OK, my last viewing was about 8 years ago, but you get the idea) as well as see the sequels in cinemas. I'm curious to see what direction the future instalments, and franchise as whole, will take. I'm also curious of a few other things, such as 'should I wait for a possible vinyl box set of all the soundtracks?' 'Will there be multiple versions of the film?' Things like that.

Speaking of, starting in December 2021, there's going to be an Avatar sequel in cinemas every two years until Avatar 5 in 2027. Doing the math makes this December the perfect time to catch up on the first film, or re-watch it - if you're a fan and are looking forward to the sequels.

Avatar can be found on a few viewing platforms - most notably, on Disney+.
Posted by insurrbution @ 23:23