Warner Bros. Drops the Ball on "The Crimes of Grindelwald" Extended Cut 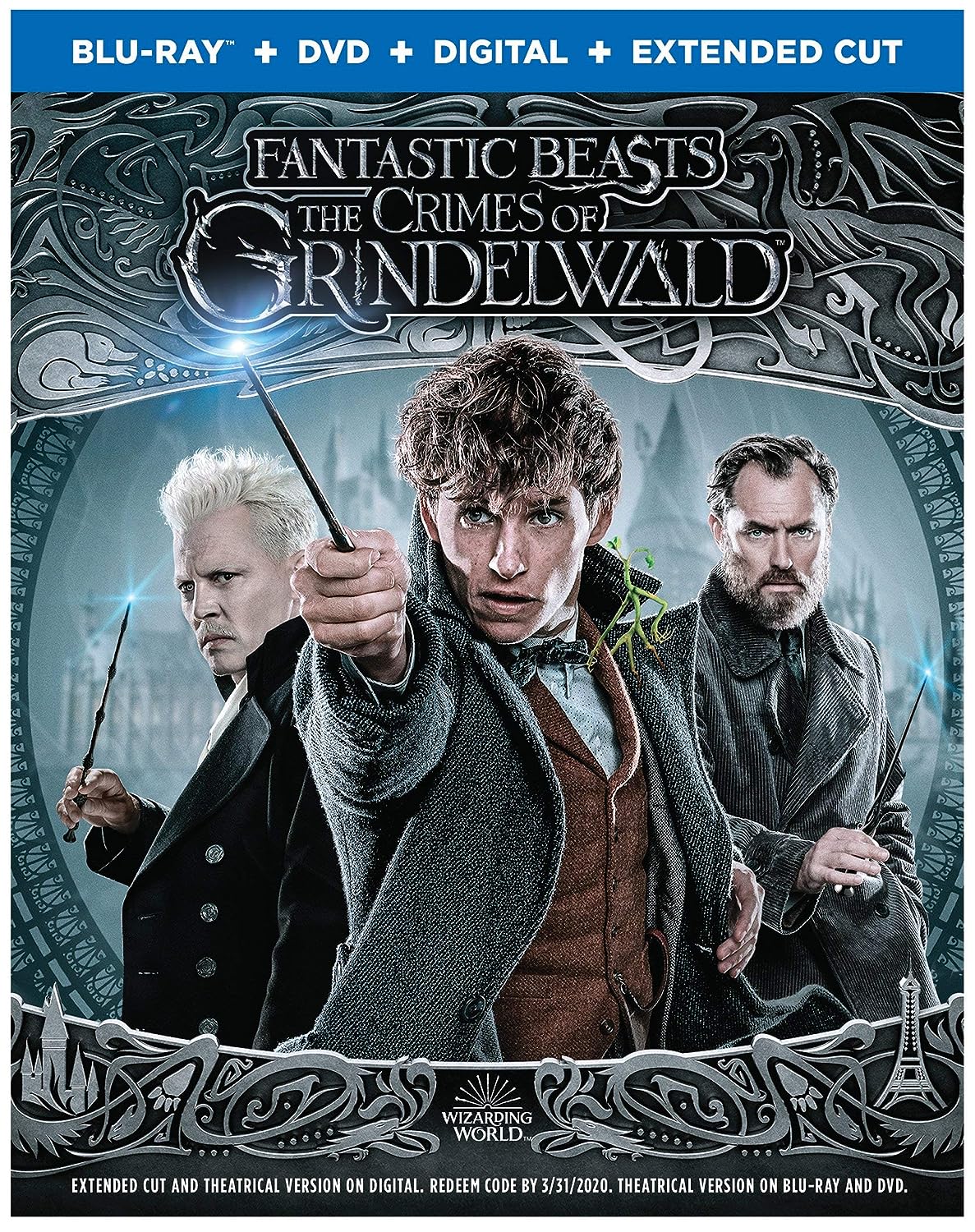 Today The Crimes of Grindelwald is out on blu-ray and 4K, and the set includes an extended cut.

Don't bother with the extended cut portion of the set.

The extended cut is not on a disc. Which is pretty freaking stupid, considering that the product is physical media. To get the extended cut, they give you a code to redeem it! It's not even on a disc, even though you're buying a disc! THAT is lazy and stupid, I think. I watched the extended cut, the added stuff does nothing to further the story or offer background info, character development... I wasn't expecting stuff like The Hobbit or The Lord of the Rings level of difference, but the new scenes are 20 seconds - 2 minutes long each. We're talking less than what was added to extended version of the first Hobbit movie. Not only did they drop the ball on how to access that version of the film, but I would like to add the following points:

1) the opening title where you see the name of the movie, in the movie, they slapped "extended cut" right there.


2) every time there's new footage it says "deleted scene" hardcoded in the bottom corner of the screen. So the way they handled the extended cut is very lazy and stupid.

Another reason why I'll wait for 5 movie set, or if there is none, get them all at once (or if all at once is cheaper). If that set doesn't include the extended cut, no big loss.

Sometimes an extended, director's, or alternate version of a film can save it from disaster, or improve on an already excellent film. Some notable examples of this include: The Lord of the Rings, Kingdom of Heaven, Once Upon a Time in America, Blade Runner (The Final Cut), and The Hobbit to name a few.

Please note, I'm not saying that The Crimes of Grindelwald is a bad movie (it's not, I liked it - I'll do a review someday soon) and I'm not telling you to not get the blu-ray or 4K version (personally I'm waiting for the boxed set and wouldn't be surprised if some are too) but rather, the way that the extended cut was handled and packaged was extremely stupid on Warner Bros.' part.

Another way to think of it, is imagine if you buy a vinyl record, and some extra content is promoted and marketed to be inside the release. Instead of putting that material onto an LP, they give you a download coupon for it...which defeats the purpose of buying the physical product to begin with. (I'm not referring to them giving you a code to download the album you also have a physical copy of)

Welcome to the Second Age

Amazon has finally fully (I never saw the point on posting about the map as it was being revealed) revealed their Middle-earth map, as well as a status update: "Welcome to the Second Age."

There is a whole bunch of information I could pass on, so first I'll refer you to portions of the various books, relating to information about The Second Age, and Numenor itself. I should also add that The Second age was also known as "The Black Years" ('Black' in Tolkien means 'dark' (depression), corrupt, foul, etc.)

- in The Return of the King, read through the Appendices
- in The Silmarillion, read Akallabeth (The Downfall of Numenor)
- in Unfinished Tales, read Part Two: The Second Age. Unfinished Tales also "...reproduces the only map of Numenor that J.R.R. Tolkien ever made."
- The Maps of Tolkien's Middle-earth book / map set by John Howe and Brian Sibley also includes a map of Numenor (exclusive to that set. By that I meant the other 3 were made available separately on their own. Only in this release can you get their tretment of the Numenor map)
- in Robert Foster's The Complete Guide to Middle-earth (illustrated by Ted Nasmith) look up the entries "Numenor" and "Second Age"

In closing, with The Second age and Numenor being the highlights of the new reveals, I can see the following items existing as tie-in merchandise:

- Map of Numenor (with The Lord of the Rings films (and maybe The Hobbit too...?) we had the Map of Middle-earth. With The Hobbit, we got Thror's Map)

- a 'compilation' book by HarperCollins (hardback? paperback? deluxe???) of various Second Age and Numenor related content, which has already been published, in its own book (much like Beren and Luthien and The Fall of Gondolin books). this possible book would be great for newcomers to Middle-earth who have never read Tolkien before, or for those fans who want all the info related to the show in its own dedicated volume.

Pretty interesting stuff at this point - I look forward to following the series as it develops, and will post the significant updates.