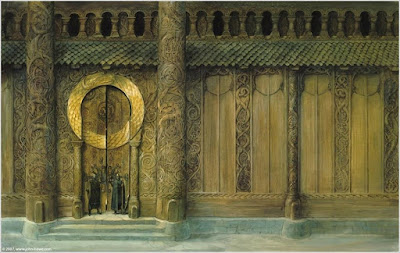 Hwaet!
I have an interest in Icelandic and Old Norse myths and legends. The old sagas and tales, they interest me. Have I read any? No, not yet...

This interest was initially sparked with the publication of Tolkien's The Legend of Sigurd and Gudrun. It was marketed quite well by both Houghton Mifflin and HarperCollins. I got the book around the publication date of May 2009 I believe it was. Over the years, I've also dabbled my toes in other areas related to some of the old legends and tales.

The following year, 2010, saw HarperCollins start their print-on-demand service for some specific titles. One of them was for the 50th anniversary publication of The Saga of King Heidrek by Christopher Tolkien. A few years following that, Penguin published some of their titles under the theme of 'Legends From the Ancient North'. Titles include: Beowulf, The Elder Edda, The Saga of the Volsungs, Sir Gawain and the Green Knight (all are re-published and existing translations at that time) and the newly published, from what I could gather - The Wanderer.

Next, once my computer was powerful enough to run it (and they were finished all content related to the game) I got around to playing Skyrim, the 5th Elder Scrolls game. That game featured a lot of story content and quests inspired by some of those old tales. Over time, I also discovered and obtained The Sagas of Icelanders by Penguin (based from the massive 1997 undertaking of publishing and translating all 50-ish Sagas) as well as few others books on the side: Seamus Heaney's Beowulf, Oxford World Classic's edition of Grettir's Saga and The Penguin Book of Norse Myths. Also, there was the publication of Tolkien's Beowulf. Not quite related, but while waiting for seasons of Game of Thrones I have also discovered Vikings, and am a fan of that show as well. And I am missing one more book - The Saga of King Hrolf Kraki. For a milestone birthday or event, I would absolutely love a copy of the 5-volume (later-bound!) boxed Complete Sagas of Icelanders, which contains EVERYTHING. That will be quite the purchase, though!

Also, one of the first single-malt Scotch whiskies I've tried (and enjoyed) is the 12 yr by Highland Park. Highland Park ha as very strong (and they embrace it and use it as part of their marketing and packaging) Norse connection. In fact, some whiskies on their respective product pages even have quotes from some of the old stories.

My interest in all these stories, and types of tales has reached its peak. This year I fully intend to read them. I'm presently reading through the Earthsea Cycle. I also plan on doing a full re-read of the (existing) Ice and Fire books as well as A Knight of the Seven Kingdoms and Fire & Blood. Those aside, my next reading project will be tackling all the Norse and Icelandic material. However, which order will that be?

- Legends From the Ancient North (in the order of: Beowulf, The Elder Edda, The Saga of the Volsungs, Sir Gawain, and The Wanderer
- The Penguin Book of Norse Myths
- The Sagas of Icelanders
- Njal's Saga
- Grettir's Saga
- The Prose Edda
- The Saga of King Hrolf Kraki (hope to have it by then)
- Beowulf (Heaney's translation)

So what began as mild or slight interest, thanks to Tolkien, has become a chief interest of mine that I look forward to exploring further. I understand that some of these are in prose, others are in verse. That shouldn't bother me, as the snippets I've read have interested me and the form does not appear to be a hindrance.

From what I can tell, the editions and translations I own and mentioned aren't too completed like some other epic poetry (in verse or prose might be.)  I look forward to reading these timeless stories; and learning about a culture through them. Also, once Vikings finishes, I look forward to getting the blu-rays. One of the reasons for this, is for some of the special features and documentaries the blu-rays may have on them.