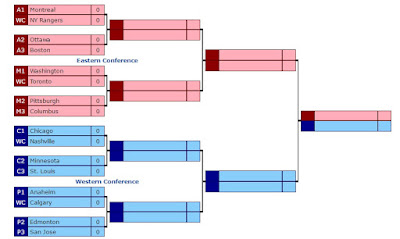 So the time has come - the first round of the 2017 Stanley Cup Playoffs has been announced. The board is set, the pieces need to move. I am also quite glad that my Ottawa Senators have made it in. In fact, so have Montreal and Toronto, much to the fans' delight.

As is somewhat custom, I will break down my first round bracket for which teams I'd love to see advance onto the next round.

As an Ottawa fan, I'm not a Montreal fan. As long as Ottawa keeps moving forward full-steam, the other Canadian teams don't matter to me 'just because' they're Canadian. This one looks iffy, though. Either team could move on, so it'll be interesting. I'm calling that it'll be the Rangers, in 6 or 7 games.

THIS will be a great round. Not just because it's the Sens, but because they'll be up against the Bruins. Of course, I'd lvoe tos ee Ottawa move on....but it could be a tough round.

I'm saying the Capital. they're usually pretty decent in the playoffs. This one should be another entertaining series.

I want Columbus to advance, and get a good, clean hit on Crosby while they're at it.

The Western conference is always exciting to follow each year.

This one will be an awesome series. I've always thought of the Blues as the team not to underestimate. I'm surprised that Minn made it into the playoffs only because they had a such a rough season. I'd like to Minn do well, however I see St Louis taking it.

This will be another matchup - so many this year!! I'd like to see Edmonton advance, however, I think the odds are stacked against them.

So those are my thoughts! It'll be a great first round of the playoffs, which will make for some great hockey. I doubt there will be any sweeps. We'll just have to watch and see..... I'll do another one of these once the Round 2 advances are set.
Posted by insurrbution @ 16:18