One of the things that got me into books, not reading, but books, was seeing all the various editions and formats of (essentially) the same text.

When I first got into Tolkien, it was late 2001. At that time, bookstores were that: bookstores. Nothing more, nothing less. Sure, sometimes at the cash line up they may have some gooodies here and there but back in those days it was all books. No home section. No American girl, nothing.

And so, after getting The Lord of the Rings in Christmas 2001 (this edition: https://s3-us-west-2.amazonaws.com/usedphotosna/43903642_614.jpg ) I went to see what else by Tolkien there was. And, I was baffled that they carried 5 or 6 different types of The Lord of the Rings: paperback, hardback, one book, three books, seven books...).

So it is because of that, that I'm "designing" some food-for-thought for Harper Collins for future editions of Tolkien's works.

The following is meant to be the 'next wave' of deluxe editions, and features the same contents the current ones have, plus what I have outlined below. 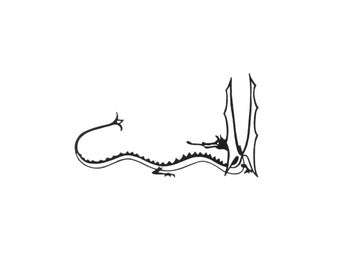 - book and matching slip-case foil-stamped embossed with Tolkien's design of Smaug, and 'JRRT' on the back
- updated, reset and definitive text [if needed since previous deluxe (possibly the same text as the facsimile first edition, the original story???)]

THE LORD OF THE RINGS 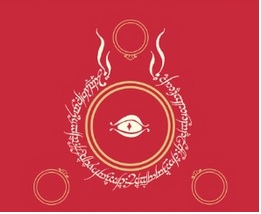 - 3 volumes (rather than a single volume) (The Fellowship of the Ring, The Two Towers and The Return of the King) housed in a single slipcase which is foil-stamped embossed with Tolkien's Ring-and-Eye motif. I say this so it'll easier to read. 1 volume rather than 3 is more 'reading friendly' and the most common way the books have existed through the years.

- each of the 3 volumes could have this page opposite the title page, rather than a list of works by Tolkien; which like how in the same spot for The Silmarillion it lists all the parts. http://www.tolkienlibrary.com/tolkien-book-store/images/001368-10.jpg
- The Fellowship of the Ring: foil-stamped embossed with Tolkien's 'Ring-and-Eye' motif (matches the slipcase) and 'JRRT' on the back. The frontispiece fold out sheet could feature Tolkien's dust-jacket design on one side, and The Forest of Lothlorien in Spring on the other.

- hand-written caligraphy style Ring-verse by Tolkien at the very beginning of the book, rather than typed in italics.

- red ink as it appeared in the 50th anniversary edition where appropriate to text.

- the most up to date text [later impressions of the boxed set featuring the Reader's Companion, or the text used for the single-volume with the Alan Lee art]

- Doors of Durin on photo paper (it does have it's own page anyway...)


- leaves from the Book of Mazarbul from the 50th.

-The Two Towers: foil-stamped embossed with the Nazgul Fell Beast, and the words which translate into “In the Land of Mordor where the Shadows lie” [as seen on the spine of the The Two Towers 50th anniversary hardback edition], with 'JRRT' on the back. The frontispiece fold-out sheet at the front could feature Tolkien's dust-jacket design on one side, and Fangorn Forest on the other [or perhaps this drawing of Orthanc: http://www.tolkienlibrary.com/tolkien-book-store/images/001260-9.jpg ]

- The Return of the King: foil-stamped embossed with the Throne of Gondor, Crown of Elessar, and tree motif [as seen on the spine of the dustjacket for The Return of the King 50th anniversary hardback edition] with 'JRRT' on the back. [Essentially take the images from the spines of 50th anniversary hardback dust-jackets, and foil-stamp them on the respective books.] The frontispiece fold-out sheet at the front could feature Tolkien's dust jacket design on one side, and Barad-dur on the other.

- red-and-black fold-out maps: Middle-earth at the End of the Third Age at the end of each olume, & Gondor, Rohan and Mordor near the beginning of The Return of the King. - heraldic devices segment (appeared in Collector's Edition of 1999 previously, as well as the calendar from the '70s)
- book and slip-case foil-stamped embossed with Tolkien's device of Luthien with 'JRRT' on the back.
- Halls of Manwe illustration by J.R.R. Tolkien facsimile frontispiece included on glossy paper. The reverse side could feature Fingolfin's device.

- red-and-black fold-out maps of Beleriand (and the Lands to the North), and Noldor and Sindar
- silk ribbon-marker (sapphire)

And that's all! I believe the deluxe editions of Unfinished Tales, The Children of Hurin, Tales From the Perilous Realm, The Legend of Sigurd and Gudrun, The Fall of Arthur, Beowulf, and The Story of Kullervo do not have anything further to add. Maybe re-publish them (or keep them printed) to go with The Hobbit, The Lord of the Rings and The Silmarillion editions mentioned above.
Posted by insurrbution @ 12:21

What great ideas! I'm so pleased to have discovered your site.