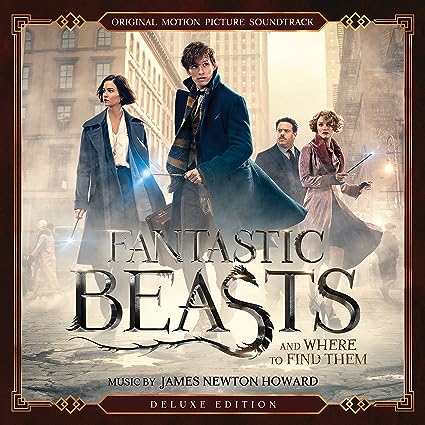 Well, I am excited for Fantastic Beasts. Initially I wasn't. The book is much smaller than The Hobbit, and getting 3 films ... and other factors. Like I've said many a-time on this blog, sometimes all it takes is a poster, photo or trailer to turn one's opinions. It was so with me and Fantastic Beasts, and the trailer named "final trailer", which was the only one I've seen.

So it's being released on the 3 main formats: vinyl (the ultimate way to own physical media. It seems CDs as an afterthought nowadays...), CD, and iTunes.

The vinyl version will be arriving November 4th, and will be a "12" picture disc." Here are the available photos at this time: 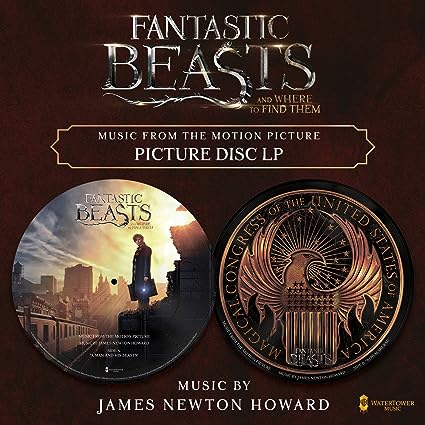 "Fantastic Beasts and Where to Find Them is an all new adventure returning us to the wizarding world created by J.K. Rowling. Featured on the picture disc are two early recordings by James Newton Howard that helped shape the musical vision for the film. Arriving in New York for a brief stopover, Newt Scamander might have come and gone without incident... were it not for a No-Maj (American for Muggle) named Jacob, a misplaced magical case, and the escape of some of Newt's fantastic beasts, which could spell trouble for both the wizarding and No-Maj worlds. The 12 inch Picture Disc LP also features artwork from the film and is packaged in a clear plastic sleeve."

The CD and iTunes versions are pretty much identical, with the iTunes using it's own special sound mix, much like how vinyls have a specified mix of that format. 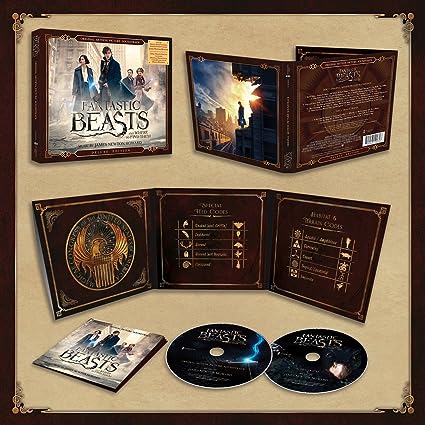 Since the tracklisting for the vinyl is unknown at this point, I didn't include anything under that section. Hopefully it'll feature the same music as both the CD and iTunes releases....there's no reason not to. So, for the CD info + tracklist :

"This album is packaged in a 2 CD digipak with 26 tracks and nearly 100 minutes of music.

Fantastic Beasts and Where to Find Them opens in 1926 as Newt Scamander has just completed a global excursion to find and document an extraordinary array of magical creatures. Arriving in New York for a brief stopover, he might have come and gone without incident...were it not for a No-Maj (American for Muggle) named Jacob, a misplaced magical case, and the escape of some of Newt's fantastic beasts, which could spell trouble for both the wizarding and No-Maj worlds.

James Newton Howard, describing the project and his introduction to the film, remarked, 'It's like joining a family in a way; I was made to feel very welcome. The scope of the movie, emotionally, visually, in every way, is very broad. There are funny moments, magical, beautiful moments, and there are some dark and scary moments. The music helps tell the story. I've had fun writing themes for the various characters and giving a musical voice to this wonderful new movie. It's been a great collaboration with musicians and filmmakers, and I've thoroughly enjoyed it!' "

1. Main Titles - Fantastic Beasts and Where To Find Them

2. There Are Witches Among Us / The Bank / The Niffler

9. Tina and Newt Trial / Let's Get The Good Stuff Out / You're One of Us Now / Swooping Evil

14. He's Listening To You Tina

15. Relieve Him of His Wand / Newt Releases The Thunderbird / Jacob's Farewell

17. End Titles - Fantastic Beasts and Where To Find Them

4. The Demiguise and The Lollipop

8. End Titles Pt.2 - Fantastic Beasts and Where To Find Them