The Prophecies of the Dragon 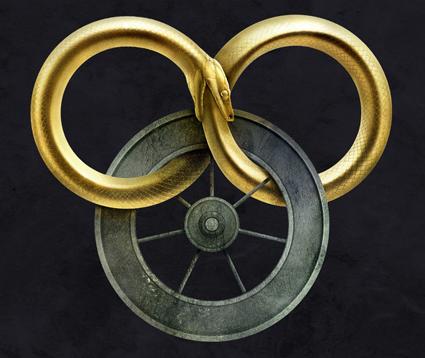 
The Wheel of Time turns, and Ages come and pass.
What was, what will be, and what is,
may yet fall under the Shadow

And the Shadow fell upon the Land, and the World was riven stone from stone. The oceans fled, and the mountains were swallowed up, and the nations were scattered to the eight corners of the World. The moon was as blood, and the sun was as ashes. The seas boiled, and the living envied the dead. All was shattered, and all but memory lost, and one memory above all others, of him who brought the Shadow and the Breaking of the World. And him they named Dragon.

(from Aleth nin Taerin alta Camora, The Breaking of the World. Author unknown, the Fourth Age)

And it came to pass in those days, as it had come before and would come again, that the Dark lay heavy on the land and weighed down the hearts of men, and the green things failed., and hope died. And men cried out to the Creator, saying, O Light of the Heavens, Light of the World, let the Promised One be born of the mountain, according to the prophecies, as he was in ages past and will be in ages to come. Let the Prince of the Morning sing to the land that green things will grow and the valleys give forth lambs. Let the arm of the Lord of the Dawn shelter us from the Dark, and the great sword of justice defend us. Let the Dragon ride again on the winds of time.

(from Charal Drianaan te Calamon, The Cycle of the Dragon. Author unknown, the Fourth Age)

And it shall come to pass that what men made shall be shattered, and the Shadow shall lie across the Pattern of the Age, and the Dark One shall once more lay his hand upon the world of man. Women shall weep and men quail as the nations of the earth are rent like rotting cloth. Neither shall anything stand nor abide...
Yet one shall be born to face the Shadow, born once more as he was born before and shall be born again, time without end. The Dragon shall be Reborn, and there shall be wailing and gnashing of teeth at his rebirth. In sackcloth, and ashes shall he clothe the people, and he shall break the world again by his coming, tearing apart all ties that bind. Like the unfettered dawn shall he blind us, and burn us, yet shall the Dragon Reborn confront the Shadow at the Last Battle, and his blood shall give us the Light. Let tears flow, O ye people of the world. Weep for your salvation.

- from The Karaethon Cycle: The Prophecies of the Dragon, as translated by Ellaine Marise'idin Alshinn, Chief Librarian at the Court of Arafel, in the Year of Grace 231 of the New Era, Third Age

And his path shall be many, and who shall know his name, for he shall be born among us many times, in many guises, as he has been and ever will be, time without end. His coming shall be like the sharp edge of the plow, turning our lives forever in furrows from out of the places where we lie in silence. The breaker of bonds; the forger of chains. The maker of futures; the unshaper of destiny.

- from Commentaries on the Prophecies of the Dragon, by Jurith Dorine, Right Hand to the Queen of Almoren, 742 AB, the Third Age

And it was written that no hand but his should wield the Sword held in the Stone, but he did draw it out, like fire in his hand, and his glory did burn the world. Thus did it begin. Thus do we sing his Rebirth. Thus do we sing the beginning.

- from Do'in Toldara te, Songs of the Last Age, Quarto Nine: The Legend of the Dragon. Composed by Boanne, Songmistress at Taralan, the Fourth Age

The Shadow shall rise across the world, and darken every land, even to the smallest corner, and there shall be neither Light nor safety. And he who shall be born of the Dawn, born of the Maiden, according to Prophecy, he shall stretch forth his hands to catch the Shadow, and the world shall scream in the pain of salvation. All Glory be to the Creator, and to the Light, and to he who shall be born again. May the Light save us from him.

- from Commentaries on the Karaethon Cycle
Sereine dar Shamelle Motara
Counsel-Sister to Comaelle,
High Queen of Jaramide
(circa 325 AB, the Third Age)

With his coming are the dread fires born again. The hills burn, and the lands turn sere. The tides of men run out, and the hours dwindle. The wall is pierced, and the veil of parting raised. Storms rumble beyond the horizon, and the fires of heaven purge the earth. There is no salvation without destruction, no hope this side of death.

- from "Glory of the Dragon"
composed by Meane sol Ahelle, the Fourth Age

The lions sing and the hills take flight.
The moon by day, and the sun by night.
Blind woman, deaf man, jackdaw fool.
Let the Lord of Chaos rule.

- chant from a children's game
heard in Great Arvalon,
the Fourth Age

The unstained tower breaks and bends knee to the forgotten sign.
The seas rage, and stormclouds gather unseen.
Beyond the horizon, hidden fires swell, and serpents nestle in the bosom.
What was exalted is cast down; what was cast down is raised up.
Order burns to clear his path.

- The Prophecies of the Dragon
translation by Jeorad Manyard
Governor of the Province of Andor for the High King, Artur Paendrag Tanreall

There can be no health to us, nor any good thing grow, for the land is one with the Dragon Reborn, and he one with the land. Soul of fire, heart of stone, in pride he conquers, forcing the proud to yield. He calls upon the mountains to kneel, and the seas to give way, and the very skies to bow. Pray that the heart of stone remembers tears, and the soul of fire, love.

- from a much-disputed translation of The Prophecies of the Dragon by the poet Kyera Termendal, of Shiota, believed to have been published between FY 700 and FY 800

Master of the lightnings, rider on the storm,
wearer of a crown of swords, spinner-out of fate.
Who thinks he turns the Wheel of Time,
may learn the truth too late.

- from a fragmentary translation of The Prophecies of the Dragon, attributed to Lord Mangore Kiramin, Sword-bard of Aramaelle and Warder to Caraighan Maconar, into what was then called the vulgar tongue (circa 300 AB)

Who would sup with the mighty must climb the path of daggers.

On the heights, all paths are paved with daggers.

The seals that hold back the night shall weaken, and in the heart of winter shall winter's heart be born
amid the wailing of lamentations and the gnashing of teeth,
for winter's heart shall ride a black horse,
and the name of it is Death.

- from The Karaethon Cycle: The Prophecies of the Dragon

And it shall come to pass, in the days when the Dark Hunt rides, when the right hand falters and the left hand strays, that mankind shall come to the Crossroads of Twilight and all that is, all that was, and all that will be shall balance on the point of a sword, while the winds of the Shadow grow.

- from The Prophecies of the Dragon translation believed done by Jain Farstrider, shortly before his disappearance

We rode on the winds of the rising storm,
We ran to the sounds of the thunder.
We danced among the lightning bolts,
and tore the world asunder.

- Anonymous fragment of a poem believed written near the end of the previous Age, known by some as the Third Age. Sometimes attributed to the Dragon Reborn

The sweetness of victory and the bitterness of defeat are alike a knife of dreams.

- from Fog and Steel by Madoc Comadrin

Ravens and Crows. Rats. Mists and clouds. Insects and corruption Strange events and odd occurrences. The ordinary twisted and strange. Wonders
The dead are beginning to walk, and some see them. Other do not, but more and more, we all fear the night.
These have been our days. They rain upon us beneath a dead sky, crushing us with their fury, until as one we beg: "Let it begin!"

- Journal of the Unknown Scholar,
entry for The Feast of Freia, 1000 NE

At the end of time,
when the many have become one,
the last storm shall gather its angry winds
to destroy a land already dying.
And at its center,
the blind man shall stand
upon his own grave.
There he shall see again,
and weep for what has been wrought.

- from The Prophecies of the Dragon,
Essanik Cycle. Malhavish's Official Translation, Imperial Record
House of Seandar,
Fourth Cycle of Elevation

It soon became obvious, even within the stedding, that the Pattern was growing frail. The sky darkened. Our dead appeared, standing in rings outside the borders the stedding, looking in. Most troublingly, trees fell ill, and no song would heal them.
It was this time of sorrows that I stepped up the Great Stump. At first, I was forbidden, but my mother, Covril, demanded that I have my chance. I do not know what sparked her change of heart, as she herself had argued quite decisively for the opposing side. My hands shook. I would be the last speaker, and most seemed to already have made up their minds to open the Book of Translation. They considered me an afterthought.
And I knew that unless I spoke true, humanity would be left alone to face the Shadow. In that moment, my nervousness fled. I felt only a stillness, a calm sense of purpose. I opened my mouth, and I began to speak.

- from The Dragon Reborn by Loial, son of Arent son of Halan, of Stedding Shangtai

Lo, it shall come upon the world that the prison of Greatest One shall grow weak, like the limbs of those who crafted it. Once again, His glorious cloak shall smother the Pattern of all things, and the Great Lord shall stretch forth His hand to claim what is His. The rebellious nations shall be laid barren, their children caused to weep. There shall be none but Him, and those who have turned their eyes to His majesty.
In that day, when the One-Eyed Fool travels the halls of mourning, and the First Among Vermin lifts his hand to bring freedom to Him who will Destroy, the last days of the Fallen Blacksmith's pride shall come. Yea, and the Broken Wolf, the one whom Death has known, shall fall and be consumed by the Midnight Towers. And his destruction shall bring fear and sorrow to the hearts of men, and shall shake their very will itself.
And then, shall the Lord of the Evening come. And He shall take our eyes, for our souls shall bow before Him, and He shall take our skin, for our flesh shall serve Him, and He shall take our lips, for only Him will we praise. And the Lord of the Evening shall face the Broken Champion, and shall spill his blood and bring us the Darkness so beautiful. Let the screams begin, O followers of the Shadow. Beg for your destruction!

- from The Prophecies of the Shadow

- from The Dragon Reborn
by Loial, son of Arent son of Halan, the Fourth Age