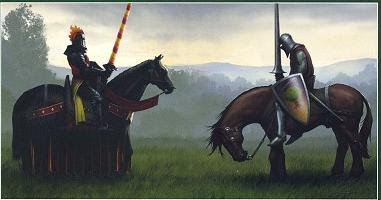 
"What's this 'Dunk and Egg' he keeps about?" you might ask. Well, they are the names of two characters (Duncan the Tall, and Aeg....that's all I'll say...) who inhabit the same world as A Song of Ice and Fire. There are currently three novellas out (in order The Hedge Knight, The Sworn Sword and The Mystery Knight) and these stories take place about 100 years before A Song of Ice and Fire Book One, A Game of Thrones, begins. The stories have appeared in 'compilation' anthologies throughout the years. Next year, the three existing tales will be (re)published in their very own book.

The first two have also been adapted as graphic novels. To which, George R.R. Martin has this to say, courtesy of his (not a) blog......

Big news in the world of comic books today!

The graphic novels of the first two Dunk & Egg adventures, THE HEDGE KNIGHT and THE SWORN SWORD, have been unavailable for several years, ever since the Marvel Comics editions went out of print. During that time, the prices for those books have steadily risen in the collector’s market, and I’ve received numerous emails from readers begging me to get them back in print.

Their wish is about to be granted.

Today, in Seattle, Amazon Publishing formally announced the launch of JET CITY COMICS, a new publishing imprint focused on producing comics and graphic novels in both electronic and paper formats.

Jet City will be putting both THE HEDGE KNIGHT and THE SWORN SWORD back into print. . . and releasing ebook versions for the Kindle, making both titles available electronically for the first time.

New Jet City issues will publish on Kindle as standalone comics, as serialized comics released over multiple episodes, and as bundled graphic novels, with print editions available at amazon.com and other comics retailers.
I’m excited to be published by Jet City, and delighted that they will be putting THE HEDGE KNIGHT and THE SWORN SWORD back into print, for all those fans who have been asking for them.

“Ah, but what about THE MYSTERY KNIGHT? “ I hear you asking. The third Dunk and Egg novella, originally published in my anthology WARRIORS, has not yet been adapted to comics.

But that’s about to change. I’m delighted to say we’ve put the old gang back together. Dunk and Egg are returning to comics. Ben Avery will be scripting, and Mike S. Miller will once again be doing the art. This time it will be Random House, the publisher of the SONG OF ICE & FIRE novels and the on-going GAME OF THRONES graphic novel adaptations, doing the book.

With Jet City and Random House behind them, Dunk and Egg could not be in better hands.

Looking forward to these! I've always been interested in reading them, but they were 'out of print' not long after I discovered Ice and Fire back in '07.  I'm also interested in the anthology of the first three coming next year.

The new edition of The Hedge Knight is coming Nov. 5 (in the print edition) and the ISBN#s are: