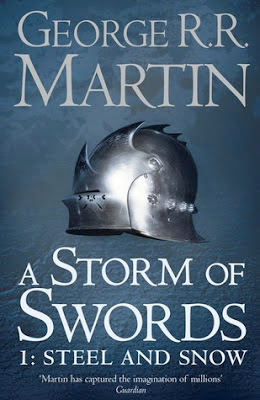 Here is my review of "Mhysa", the season 3 finale for Game of Thrones.

Wow, what a great season! I'm much looking forward to The Winds of Winter, Book Six in George R.R. Martin's series, but so far the HBO series is keeping me patient.

Season 3 is a vast improvement over season 2. Not that Season 2 was terrible, mind, but it's been overall the weakest season so far, but with great moments and episodes scattered about. Season 3 is based on volume 3 of A Song of Ice and Fire, which is called Steel and Snow. Or, the first part of A Storm of Swords, if you will. Some of the books are so large, in some publications, be it in a particular format, or by a certain publisher, country, etc split some of the books into smaller volumes or parts. Harper is possibly my favorite publisher, and I've been told make great editions of A Song of Ice and Fire, which, looking at their treatment of Tolkien's books and others, is quite believable. Anyway, back to the show...

Mhysa was a great episode. A lot happened in it that I enjoyed from the book, and am looking forward to what it hints at to come in the future. Although, that said, as a season finale, it was a little weak. Not 'slow' or 'boring' (some people found this was to be the case, not me); but it seemed more like a season premiere, or second episode of a season. This could also be very well due to the fact that season 3 is only half a book.

How about the rest of the season? Incredible. It was a much better adaption than season 2, and was great TV watching. We get to see what happens to Theon at the hands of a tormentor who could be more sadistic than Joffrey. There are more bad-ass Dany moments. And 'The Red Wedding' was as as powerful on screen as it was in the book, as you might have heard via the media buzzing like bees. This season was a little less action heavy, but it made for some gripping drama in it's place. There were also some great twists and turns too!

Despite missteps here and there throughout various episodes, Game of Thrones brings possibly the best fantasy books ever to the screen in quality and entertaining television.

I give Mhysa a

and season 3 on the whole whole a well-deserved

I'm looking forward to season 4. Hopefully, The Winds of Winter will be out close to then. As I believe 2014 will be "The Year of Ice and Fire" [next post on why....]

What I'm guessing will be next for the HBO series :