It’s a hockey fan’s favorite time of year….play off season. Here is all the info you need
to know. I am cheering for Pittsburg, Ottawa, Washington, and Boston. In the West:
Chicago, Detroit, San Jose, and LA. Here is the playoff bracket. After the jump is all the
info. 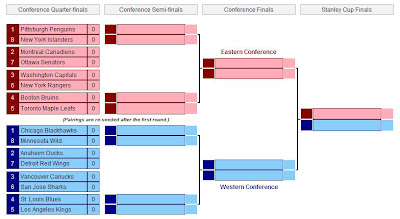 The Ottawa Senators are going the playoffs. Not only did they beat the Caps tonight 2-1, but one of the team's best players, Karlsson, has returned to the game tonight. I'll do another hockey post closer the playoffs. Well done boys. Onto the next battle.....

The Ottawa Senators have had a pretty season for the most part, but the last 2/3 or half haven't been too good. There was Karlsson's injury. Speza was out. And Anderson was out...all at once. We've won a few good games here and there, but the stats haven't been as good since all the injuries. Like the team is trying to climb back up, but a nasty person at the top ledge keeps batting them and down and away. And they lost their Saturday night game to the Toronto Make Me Laughs. Ouch baby. Very ouch.

I am a strong and proud Sens fan as much as the next guy. Been following them since...'97. I don't 'follow' the stats or the points but watch when I can, and make the odd rant here and there. However, playoffs are right round the bend. Should the Sens not make it in (I hope they do, but the way they've been playing....) I have a few teams in mind to consider. I'll save that for another post, but keep an eye out on the Washington Capitals. Sure, the mighty Senators have gotten rid of their 8 game winning streak, but they did win 8 games in a  row before that. Pittsburg seems to very powerful in the East. We shall see.
Posted by insurrbution @ 21:36 No comments:

The End of a Monster

It has been announced by ShowTime that the upcoming eighth season of Dexter will be its last. I will definitely be sure to write a series review. That means, this fall I can begin watching Homeland, as a TV show (Dexter) will be 'removed' from my list. The final season begins June 30. The official word:

I see in your eyes the same fear that would take the heart of me. A day may come when courage fails, but it is not this day.
Posted by insurrbution @ 21:15 No comments:

"The Wheel of Time" ebooks 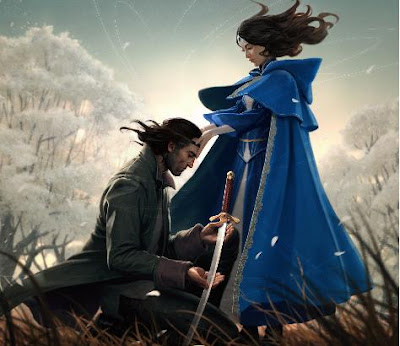 The Wheel of Time series is now complete, as today the final book was released in ebook format. There is no 'complete series' download bundle which includes all 14 books, but books 1-14 are ready for download. So if you read, or plan to read this series not as a printed book, you're in luck. Myself? I'm waiting for A Memory of Light in mass market paperback, as I have the previous thirteen books in that format. I'm going to guess that it should be out as early as October of this year, as late as next Jan, as the publisher is pretty good for releasing paperbacks in a timely manner. I'll also keep you posted on the 'trade paperback' re-issues, as well.

Sometime ago I posted the series prologue. Here is something a little more....

Email ThisBlogThis!Share to TwitterShare to FacebookShare to Pinterest
Labels: ebooks, fantasy, reading, The Wheel of Time 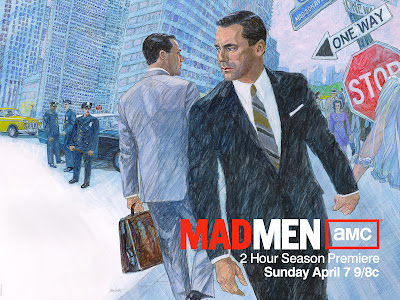 Tonight is the season 6 premiere of Mad Men. The episode to look for is entitled "The Doorway".
Posted by insurrbution @ 19:57 No comments:

I finished reading The Shadow Rising. What follows is my review of The Wheel of Time book 4....

Email ThisBlogThis!Share to TwitterShare to FacebookShare to Pinterest
Labels: books, fantasy, reading, review, The Shadow Rising, The Wheel of Time

Getting Back to It

I am not a full time writer. I write as a hobby, and an interest of mine. I may blog more often than I write, but I still enjoy and am continuing to breathe life into my Kalvel series.

With the return of Game of Thrones, and possibly The Winds of Winter arriving next year (just my guess, we will have to see) I have become more motivated to write more in one sitting, and more often. So it will be a little less blogging lately, and more effort put into my novel as well as the series it is a part of. I will still stop by and say hello every so often. It may once a week, or once every two weeks…nah, that’s too long. About once a week.

Most of the planning for Vol. 1 is pretty much done. I know who the main five viewpoint characters will be, and where Vol. 1 will end, and Vol. 2 will begin. I have a few chapters written, as well as the Interlogue. I have a good idea of what will happen to who in Vol. 3-5, and some ideas on where to end one volume and start another. But I’ll worry about those when I get there. Now, my main focus is creating the map for Vol. 1, as well as the actual writing process. And some thought as to what the ‘focus’ of Vol. 2 will be – the viewpoint characters, what will happen to who in that volume…. I have a good overall idea and plan for the series, but the focus for the time being is Vol. 1. I’m working on that book and the series as a whole at once so things can fit in together, mesh and line up. I want to lay the story down as best as I can before it gets into the hands of any editor, then work on finer details later on. Essentially, the best books they can be before I even think of printing them or sending them out.

Future volumes will be more and more fleshed out, of course, as I write them. The writing won’t be me filing in the blanks, because that would be no fun. But dealing with a five-volume fantasy series, where each book will be about 600-800 pages in hardcover, there’s going to be a lot of trimming and making sure everything conforms to what I have in mind. I am going to save everything. If a plot thread or something does not work out in a novel, guess what, it could pop up later as a short story, novella or something of the sort. Should I need a sixth volume, it will just be because Vol. 5 is too large. That sixth volume won’t be overly large, most likely closer to 600 pages, even if volume 5 is 770. These are just my personal guidelines, of course, so my series won’t ‘run wild’. I predict the most difficult ones to write, and the longest to do so will be the first (now) and the last.

But what about my writing beyond Kalvel and fantasy?? I have always been interested in exploring gangsters (20s-40s era), zombies, spy / thriller, and maybe even sci-fi, though for me at this point, it seems very tricky to create something new or of my making in sci-fi that doesn't scream 'Stark Trek!' or 'Star Wars!' for example Any of these fields could be novel, novella, novelette, short story....we will see what happens.

So now it’s back to it! I’d like to have three chapters written between now and when my girlfriend returns from back North in about 1.5 – 2 weeks time. Love you sweetie! Have fun and be safe!
Posted by insurrbution @ 16:04 No comments:

....and speaking of Game of Thrones, earlier today I saw this courtesy of HBO....

Writing remaining A Song of Ice and Fire is George's primary (but not only) priority, so hopefully this will cause some creative motivation to finish the last two books at a decent pace. Here's hoping for a timely release, with quality writing. And in regards to Season Four? The last bit of Book Three, A Storm of Swords and we may get to see Dorne. The Red Viper. The Sand Snakes, and more awesome scenes, cinematography, writing and acting.


HBO RENEWS GAME OF THRONES FOR FOURTH SEASON
——–
Season Three Soars To Highest Viewership Yet
——–
LOS ANGELES, April 2, 2013 – HBO has renewed GAME OF THRONES for a fourth season, it was announced today by Michael Lombardo, president, HBO Programming.
Based on the bestselling fantasy book series by George R.R. Martin, GAME OF THRONES is an epic story of treachery and nobility set on the continent of Westeros, where summers and winters can last years, and only the lust for power is eternal. The Emmy®- and Golden Globe-winning series launched its ten-episode third season Sunday, March 31 (9:00-10:00 p.m. ET/PT), exclusively on HBO, with other episodes debuting subsequent Sundays at the same time.
Among the early critical praise for the third season, the Hollywood Reporter called GAME OF THRONES “addictive and outstanding,” while Newsday termed the series “superb,” awarding the show an A+. The Chicago Tribune hailed the show as “spellbinding” and the Washington Post described it as “masterful.”
According to early data, GAME OF THRONES’ season three premiere March 31 on HBO topped the series’ highs, with record viewership for both the 9:00 p.m. (ET/PT) airing and gross audience across the three plays. At 9:00 p.m., it averaged 4.4 million viewers, outperforming (+4%) the previous high of 4.2 million viewers from last season’s finale. GAMES OF THRONES improved 13% in comparison to last season’s premiere of 3.9 million viewers. Across the three plays for the night, 6.7 million viewers tuned in, surpassing last season’s debut night of 6.3 million viewers by 7%. Last season, GAME OF THRONES had an average gross audience (HBO linear plays + HBO On Demand/HBO GO + DVR) of 11.6 million viewers. 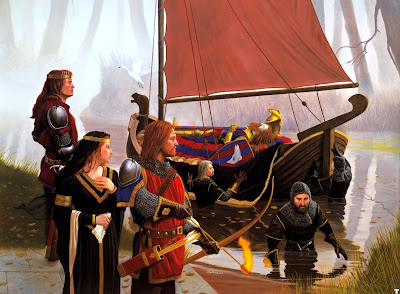 Last night Game of the Thrones returned on HBO with the premiere of its third season. Here is my (spoiler-free) review....