The End Has Come


Today’s the day. The finale of The Wheel of Time. The publisher has sent out daily
teasers for the past month or so, and here they are compiled here. Spoiler warning, in case.


I don’t believe any of these are spoiler-y, aside from knowing who’s still alive
going into the final book. 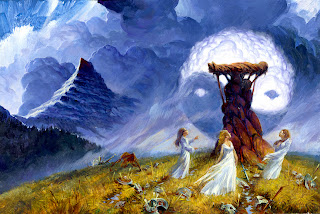 It had been useful at Maradon. Nobody knew he had it. That was important.

"I should like to hear one of your stories. Perhaps you could tell me of the time your father and you visited Shara?"

"Being married is not so bad, Perrin. Why didn't you tell me it was not so bad? I think I am rather
fond of it."


"Creator shelter us," she whispered.


The right thing had always seemed clear to Galad before, but never had it felt as right as this. Those streaks of light were like indicators on a map, arrows pointing his way. The Light itself guided him. It had prepared him, placed him here at this moment.

Egwene strode around a frozen pillar of glass in her dream. It almost looked like a column of light. What did it mean? She could not interpret it.

The letter was written in Mat's hand. And, Elayne noticed with amusement, the handwriting was much neater and the spelling much better in this one than the one he'd sent her weeks ago.

"And farewell to you, old friend," she said to the air. "Until I dream again."

"One more thing, the marath'damane . . ."
"I'll deal with those channelers personally," Mat said.
She gawked at him as if he were insane.

"Enough talk. You will bed me now."

"We must spread the word to all of our allies," Amys said. "We must not use this weave."

That, she replied back, is something one should never, never say to an Aes Sedai. Ever.

“It is a simple thing, to stop a man’s heart,” Cadsuane said, arms folded.

"Do not cut off your foot for fear that a snake will bite it, Perrin Aybara. Do not make a terrible mistake because you fear something that seems worse. This is all I will say on the topic."

"It is one of the three things which I will require of you. Your payment, to me, in exchange for my life."

Fortuona ignored her, standing. "This woman is my new Soe'feia. Holy woman, she who may not be touched. We have been blessed. Let it be known."

"What did you do to your eye?"
"A little accident with a corkscrew and thirteen angry innkeepers."

As Tam attacked again, Rand lifted the sword and-

And you don't feel a small measure of pride? Egwene asked herself. Rand al'Thor, once simple village boy and your near-betrothed, now the most powerful man in the world? You don't feel proud of what he's done?

"Why are you helping me?" Perrin demanded.
"I'm fond of you, Perrin."

"There were many good years. Good decades, good centuries. We believed we were living
in paradise. Perhaps that was our downfall. We wanted our lives to be perfect, so we ignored
imperfections. Problems were magnified through inattention, and war might have become
inevitable if the Bore hadn't ever been made."

Uno's topknot danced as he continued to blaspheme.

"Peaches!" Rand said, aghast. Everyone knew those were poisonous.

“Didn’t you once lead a band of thieves out of this forest?”
Birgitte grimaced. “I was hoping you hadn’t heard that one.”

Rand strode forward, lifting his arms out to the sides. Grass sprouted in waves, red blossoms
burst from the ground like a blush upon the land. The storm stilled, the dark clouds burned away by light.

A joyful song, a song of awe and wonder, though she could not understand the words.

Rand stiffened. He'd known what he was doing, on some level, but to hear it explained was
disconcerting.

If the end of the Aiel was the sacrifice required for Rand to win, she would make it.

What did you do when the One Power failed, the thing you relied upon to raise you above
common folk?

The Blight had consumed the Two Rivers.

I AM THE ONLY HONESTY YOUR WORLD HAS EVER KNOWN.

Humankind did not have days remaining, but hours.

They seemed to be cracks into nothingness. They drew the light in, sucked it away. It was as if he was looking at fractures in the nature of reality itself.

"We'll remember those who fell, and we'll tell our children how we stood when the clouds turned black and the world started to die. We'll tell them we stood shoulder to shoulder, and there was
just no space for the Shadow to squeeze through."

They stood at the edge of time itself, and still Thom Merrilin found a smile.

Loial, son of Arent son of Halan, had secretly always wanted to be hasty.

By the Light, he had a book to finish before he went!

Rise, and save the world.

And now to wait for the paperback to be released…

Email ThisBlogThis!Share to TwitterShare to FacebookShare to Pinterest
Labels: A Memory of Light, books, fantasy, reading, series finale, The Wheel of Time