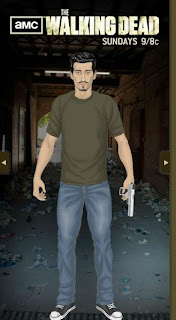 I hate zombies. I was never a fan of the whole shambling corpse thing. Oh sure they're dangerous in numbers or if they get the surprise on you. Was just never really a fan of the whole thing. And still aren't, really. Only the odd book, show or movie here and there. Until recently.

Say what will you about Zack Snyder's 2003 version of Dawn of the Dead, but I enjoyed it for scare factor, and making them 'modern' again. As good s the original is (not "was"), it's dated. To me, anyway. Amazing for it's time, but I'm not a fan of the low budget look and feel.  I should add I'm not really a fan of B or C movies that are intentionally campy. or are campy, unintentionally.

That is why I like the new version of Dawn of the Dead, 28 Days Later (perhaps the best zombie film not movie) and AMC's Walking Dead, and the comic series that spawned it.

With Walking Dead in particular, it's more character and emotion driven, than action action and and scares. Not that they aren't shy about scaring you, or testing your iron stomach at times.

Should you find yourself in a zombie (or walker, or roamer...) situation, there are 10 rules from the Zombie Survival Guide to follow, as well as my musings:

1. Organize before they rise!
Have a plan in effect. Always have a kit with tools and some canned food. First Aid kit (in case of non-zombie wounds), various knives,
hatchets...you get the idea. Not to mention where you would go, in order once it happens.

2. They feel no fear, why should you?
It's kill or be killed. Show them no mercy. They want nothing better than to rip you to pieces, and gorge on said pieces. Sure they used to be people - but there's no turning them back, no cure.

3. Use your head: cut off theirs.
That is *the* way to stop a zombie. Take it's head off, or bash it in. If you can't, well, amputation or other 'injuries' will momentarily halt them.

4. Blades don’t need reloading.
Sure guns have range and get the job done in a pinch, there's a huge drawback (and I'm thankful this something worked into Walking Dead) is the noise. Yup, other (herds) may come swarming over the sound of boom-boom-pow.

5. Ideal protection = tight clothes, short hair.
Because zombies like to grab you, and not let go. Why make it easier?

6. Get up the staircase, then destroy it.
For one, it keeps you above them. For another, zombies don't 'climb' (ladders, poles, beams, etc.) their overall skill and intelligence is quite low. The threat lies in their numbers.

7. Get out of the car, get onto the bike.
Cars need gas. Finding it in areas with little to no zombies would be practically impossible. You power the bike.

8. Keep moving, keep low, keep quiet, keep alert!
Always stay on the run. Some zombies may faster than others, but as humans, we are ahead of them intelligence wise. Think of herds of them will be, and detours around those areas. Use guns as least as possible. Also, don't kill zombies if there's no 'threat'. Avoid when possible. Even killing? yup. You may need that bullet, or extra few seconds it took to off it..

9. No place is safe, only safer.
As we saw in Walking Dead season 2, they would have found the farm eventually, even if the gun wasn't fired. Always keep on the run, grabbing what you can (and need) as you go. Of course, go for secure areas, not permanent ones. If you find a spot that is both, stay there a bit longer than you normally would whilst on the run.

10. The zombie may be gone, but the threat lives on.
Infection. Other survivors. Other survivors who are anarchists. And of course, more zombies. Sure, you made it through New York City, what about the rest of the world though?

The zombie apocalypse is that end of the world scenario where zombies have taken over the world and infected most of the population. They keep looking for fresh meat and search buildings for the last surviving humans. See more http://survival-mastery.com/skills/defence/zombie-survival-guide.html

How to Make Pemmican The Ultimate Survival Food

Invented by the natives of North America.

Pemmican was used by Indian scouts as well as early western explorers.

These people spent a great deal of time on the go and depended on having portable, high-energy, highly nutritious, and filling foods that would last for long periods of time without refrigeration.

Click HERE to Learn How to Make Pemmican The Ultimate Survival Food !

These guys were the last generation to practice basic things-for a living-that we call survival skills now.

Survival Things Our Great Grandfathers Did Or Built Around The House!