The Franchise That Killed Itself 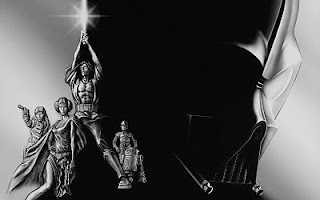 Yes, everybody knows this opening phrase, even if you've never watched or played a Star Wars game. The topic of this post is about how Star Wars, which was a game-changing cinematic, & pop-cultural staple, is now a joke....

First some history behind the film, and the series. It all began in the '70s. The first film (yet actually  the fourth..) opened to a successful reaction in cinemas in '77. There were deadlines that couldn't be met, budget problems, etc, but the bottom line is that director, creator and (evil) mastermind George Lucas had a hit on his hands. But of course, that first film (which was actually the fourth in the story) was only part of the tale Lucas wanted to tell. IF Star Wars had failed at the BO rather than dominating it, we would have only gotten on more film, and that would have been it. If my knowledge is correct, the "Star Wars 2 if Star Wars 1 bombed" story was an expanded universe novel called Splinter of the Mind's Eye.
As we all know, we got Empire Strikes Back, which many consider to be the best. Is it perhaps of the (now redundant) mis-quoted plot twist? (It's not "Luke I am your father." it's actually: "No, Luke. *I* am your father." see the difference?). Empire also gave us a cliffhanger ending.
BOOM, three years later we arrive at the end of the (original) trilogy, Return of the Jedi. Now for some fans, this is where "The Fall of the Franchise" began *coughEworksthatwereoriginallysupposedtobeWookiescough* . Again, Lucas did not direct this installment. Once Return of the Jedi concluded, we had a really great trilogy on our hands....
Until....


For the 20th Anniversary of Star Wars (now called A New Hope, or Episode IV: A New Hope), Lucas once again dipped his hands into the world of Star Wars to "fix some problems." Ummm....what problems? Oh! You mean some slight glitches & wires visible, etc..? Yeah, sure we can live with that... cleaning up the print, remastering the sound, that seems good, too!

We got that...but Lucas added in pointless CGI (CG of '97 in a film made in '77) that mucked about the pacing of the films, and stood out like a sore thumb. Such as this... 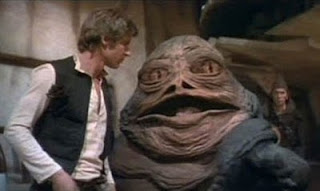 Sadly, that was only the beginning of how Star Wars shot itself in the foot. There have been more & numerous small changes over the years that kept making the original films worse and worse. Besides, why not use the same model of Jaba for each and every film he appears in??? Oh, and Lucas has made it practically impossible to get a hold of the original unaltered films. Great.

Two years later, The first film of the "Prequel Trilogy" came out: Star Wars Episode I. It was a disappointment, though entertaining. The biggest issues of that film was showing Anakin as a kid. Not a boy or teen like Luke, but an actual kid. Also, they killed off a cool villain, and had too much of a certain CG character. Not to mention, the effects came first, story & everything else second.
The second film was better, with more Jedi focus. And of course the third saw the rise of the Empire, the destruction of the Jedi, etc.

Two things I would have changed. a) Make the story start JUST as Anakin begins his Jedi trials with his Master (Obi-Wan right off the bat? someone else then Obi during the first film, start of the second?). Have him transform into DARTH VADER (suit and all) midway through the third film.
b) The Jedi were made into action / super heroes that were almost invincible. Maybe make them more Samurai-esque. Give them force powers, but not to that magnitude.

Also, why start at FOUR? If you're going to make a Star Wars film and not sure how it turns out, re-work your story ideas and start at the beginning. Oh, you have to make a climatic space battle with the Death Star into Episode I instead of 4...no big deal, really...

There's a new animated TV series (season 4 starting up soon, if it hasn't already yet) called The Clone Wars. And, despite its youth target audience, is pretty decent, and has things to (try) tie the two trilogies together. I wonder, though, how they will explain that Anakin's apprentice complete and utter disappearance from Episode III, though....

What went wrong with the prequels? Writing? Directing? They were 'off' for the most part.

Another thing is the parodies. ENOUGH. Robot Chicken... Family Guy.... Spaceballs.... How it Should Have Ended.... My lord, it's hard enough to watch the original films with all these 'changes', and someone has to poke holes through the story, further diminishing the quality? You don't see Indiana Jones, Harry Potter or Lord of the Rings getting parodied / Lampooned to death.  Or, as 'blatant'.

Suffice to say, despite the changes to cinema and the advances in technology, the Star Wars films have gradually lost their touch.

I will close by saying there are good sources for story. I enjoyed reading the novelizations of all 6 films. And still kind of do, as you're free to use your mind. Some video games are worth looking into (Knights of the Old Republic, Rogue Leader, and Jedi Knight II), as is the Thrawn Trilogy by Timothy Zahn (What happens after Return of the Jedi??)  .

And of course, Star Wars' brightest achievement is the music....